Since Halloween is around the corner, I’ve planned out my TBR (To be read) list for this month!

I chose these books on the basis of their genres and other people’s reviews, so I’m hoping each of them give this October a suitably creepy atmosphere.

This book is said to be based around dark fantasy, so I chose this as a transitioning book between my usual choices and my official Halloween books. A story about spirits and monsters, and the creepily named “Forest of the Dead”, this seemed like a good choice for a book that would create a darker atmosphere. I have already read this, and a review will be uploaded soon after this post.

In the Forest of the Dead, where the empire’s worst criminals are exiled, twin sisters Moria and Ashyn are charged with a dangerous task. For they are the Keeper and the Seeker, and each year they must quiet the enraged souls of the damned.
Only this year, the souls will not be quieted.

Ambushed and separated by an ancient evil, the sisters’ journey to find each other sends them far from the only home they’ve ever known. Accompanied by a stubborn imperial guard and a dashing condemned thief, the girls cross a once-empty wasteland, now filled with reawakened monsters of legend, as they travel to warn the emperor. But a terrible secret awaits them at court—one that will alter the balance of their world forever. 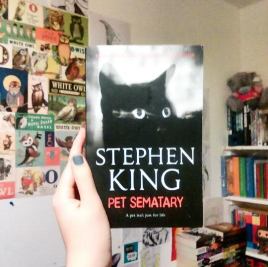 At this moment in time, I am about halfway through this book. I think it’s a given that if you want a spooky book to read around Halloween, go for a Stephen King novel. This will be the first Stephen King book that I’ve ever read, and I thought it only suitable if I read it in October. This seems like a paranormal thriller, and I’m expecting lots of plot twists and horror throughout the rest of the pages.

Sometimes dead is better….When the Creeds move into a beautiful old house in rural Maine, it all seems too good to be true: physician father, beautiful wife, charming little daughter, adorable infant son — and now an idyllic home. As a family, they’ve got it all…right down to the friendly cat.But the nearby woods hide a blood-chilling truth — more terrifying than death itself…and hideously more powerful. 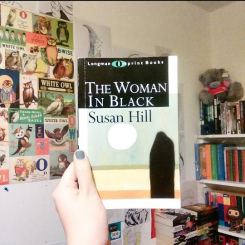 I’ve seen the film, and was suitably freaked out, so now it’s time to see if the book does just as much. I added this on a whim, but I’m gradually seeing more and more people saying this book is terrifying, so I’m excited to form my own review of it. For such a short book, I hope I will be pleasantly surprised.

Arthur Kipps, a junior solicitor in London, is summoned to Crythin Gifford to attend the funeral of Mrs Alice Drablow, and to sort through her papers before returning to London. It is here that Kipps first sees the woman in black and begins to gain an impression of the mystery surrounding her. From the funeral he travels to Eel Marsh House and sees the woman again; he also hears the terrifying sounds on the marsh.

Despite Kipps’s experiences he resolves to spend the night at the house and fulfil his professional duty. It is this night at Eel Marsh House that contains the greatest horror for Kipps. Kipps later discovers the reasons behind the hauntings at Eel Marsh House. The book ends with the woman in black exacting a final, terrible revenge. 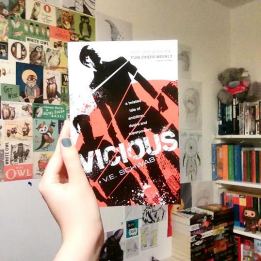 This was not originally planned on my TBR list, as it is not spooky or scary in any way (so I’ve heard). However, I discovered that I will likely finish the previous books before Halloween, and decided I need another book like the first, where it has a dark atmosphere surrounding the story. A lot of reviews say this about Vicious, so I decided to give it a go. And with me having previous experience with Victoria (VE) Schwab’s writing, I am pretty sure I will enjoy this just as much.

Victor and Eli started out as college roommates—brilliant, arrogant, lonely boys who recognized the same sharpness and ambition in each other. In their senior year, a shared research interest in adrenaline, near-death experiences, and seemingly supernatural events reveals an intriguing possibility: that under the right conditions, someone could develop extraordinary abilities. But when their thesis moves from the academic to the experimental, things go horribly wrong.

Ten years later, Victor breaks out of prison, determined to catch up to his old friend (now foe), aided by a young girl whose reserved nature obscures a stunning ability. Meanwhile, Eli is on a mission to eradicate every other super-powered person that he can find—aside from his sidekick, an enigmatic woman with an unbreakable will. Armed with terrible power on both sides, driven by the memory of betrayal and loss, the archnemeses have set a course for revenge—but who will be left alive at the end?

And that’s my Halloween TBR!

All synopsis’ and book cover images found on Goodreads.

2 thoughts on “My Halloween TBR”