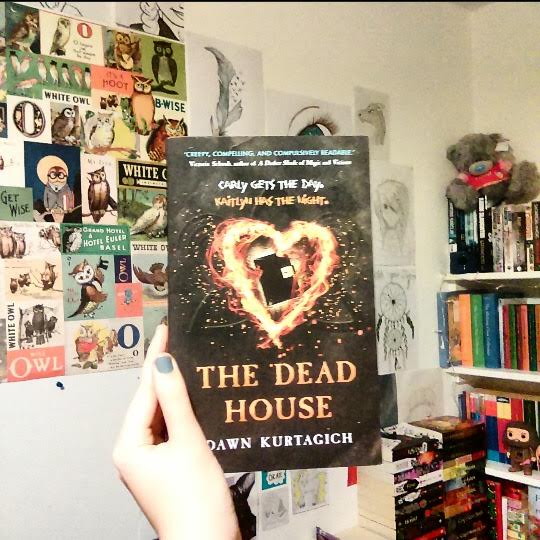 Part-psychological thriller, part-urban legend, this is an unsettling narrative made up of diary entries, interview transcripts, film footage transcripts and medical notes. Twenty-five years ago, Elmbridge High burned down. Three people were killed and one pupil, Carly Johnson, disappeared. Now a diary has been found in the ruins of the school. The diary belongs to Kaitlyn Johnson, Carly’s identical twin sister. But Carly didn’t have a twin . . .

Re-opened police records, psychiatric reports, transcripts of video footage and fragments of diary reveal a web of deceit and intrigue, violence and murder, raising a whole lot more questions than it answers.

Who was Kaitlyn and why did she only appear at night? Did she really exist or was she a figment of a disturbed mind? What were the illicit rituals taking place at the school? And just what did happen at Elmbridge in the events leading up to ‘the Johnson Incident’?

Chilling, creepy and utterly compelling, THE DEAD HOUSE is one of those very special books that finds all the dark places in your imagination, and haunts you long after you’ve finished reading.

I absolutely sped through this book. To say I’d never heard of it before and got it on a whim after being intrigued by flicking through the pages, I am highly impressed.

The thing I loved most about this book was how it was written. It is laid out entirely in diary entries, emails, interviews, camera footage (etc) and is presented as a case study. Each page was a piece of evidence towards this great mystery. While I was reading I wanted to tell everybody about it, to share the story. I found it so unique to read, and managed to get through over 400 pages within 2 days (which I hardly ever do).

The story was creepy but also incredibly intriguing. The mystery aspect kept compelling new to read on, I just HAD to know what on earth was happening. I found it to be an interesting combination of both science and paranormalcy, both sides having a case in the mystery. All of the characters were so unique, carrying their own personalities that were fascinating to read about.

I loved this book from the beginning, the creepy atmosphere surrounding it and the way it is presented causing it to become one of my favourite books!

This would be a perfect read for Halloween!
Rated 5//5 stars!

11 thoughts on “The Dead House by Dawn Kurtagich”