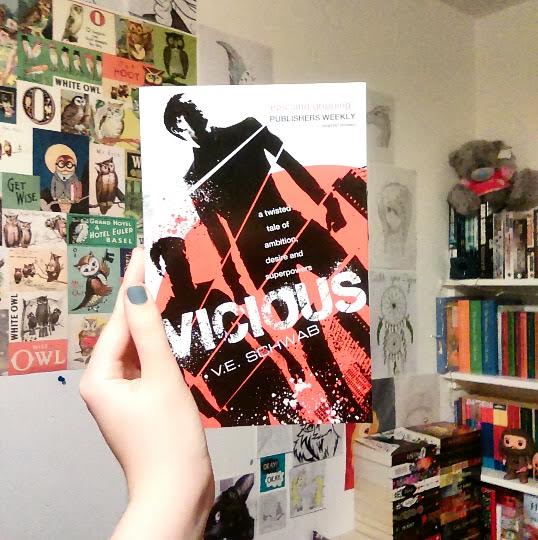 Victor and Eli started out as college roommates—brilliant, arrogant, lonely boys who recognized the same sharpness and ambition in each other. In their senior year, a shared research interest in adrenaline, near-death experiences, and seemingly supernatural events reveals an intriguing possibility: that under the right conditions, someone could develop extraordinary abilities. But when their thesis moves from the academic to the experimental, things go horribly wrong.

Ten years later, Victor breaks out of prison, determined to catch up to his old friend (now foe), aided by a young girl whose reserved nature obscures a stunning ability. Meanwhile, Eli is on a mission to eradicate every other super-powered person that he can find—aside from his sidekick, an enigmatic woman with an unbreakable will. Armed with terrible power on both sides, driven by the memory of betrayal and loss, the archnemeses have set a course for revenge—but who will be left alive at the end?

After reading this book I’ve decided to read every single story that Victoria Schwab has ever written. I decided to pick this up because i wanted to see if I would enjoy her writing as much in a different story, since I have read A Darker Shade of magic beforehand, and I have to say I am very impressed.

This was a story full of revenge and mystery, much like any superhero story. I wasn’t sure whether I’d enjoy the superhero aspect, because I haven’t read a superhero novel before, but I thought it was very cleverly planned out. I found the story to be entirely believable, since the theory behind superheroes starts out as a science experiment. Throughout the book there are explanations to why different people have different abilities, and the knowledge behind it all seems so thoroughly thought out, I had no problem with thinking it to be true. Although the story is based on science, the wording never became too complex or overwhelming, so it was easy enough for me to keep track of the science even though I personally don’t know anything about chemistry and biology.

The thing I found most interesting about this book – and I think anyone who’s read it will agree – is the characters.

Every single character in this book is completely different from the next. Some were controlling or obsessive, almost paranoid. Some collected and calm, but possibly hiding more. Some jealous or easily lead, only to overcome their own doubts. There were just SO many different personalities, and I loved each character for their own reasons. 😀

Victor and Eli – the main characters – were somehow so similar and yet polar opposites at the same time. Being stubborn, ambitious, and holding a grudge for a very long time were just a few of the things they had in common. I was glad to see that Sydney (the young girl mentioned in the synopsis) seemed to have appropriate reactions to everything put in front of her, and didn’t magically become some unrealistic unafraid twelve year old who could handle anything.I loved how Mitch – the typical huge-tough-guy-in-prison sort of guy – actually had a much softer side to him. As I said before, the diversity of characters was applaudable.

The age differences between the characters were interesting too, as it’s common for books to be based around characters of similar age.  As the story went on, each person went through character development, adding more and more layers to their complexity, making them seem like genuine people. Everyone had their own little quirk. There is no clear rule of who’s the “bad guy” of the story, since it seems more of a matter of opinion, that constantly changes as the story goes on.

The plot line was really enticing, with at least one person having a plan at any given time. I felt myself needing to read on, fully intrigued by what would happen next. I was most curious about what each character’s ability would be, and how it reflects their personality, since that seemed to be an important part of the story. I was surprised that the timeline wasn’t complicated or confusing at all, since it kept switching back and forth. I enjoyed how the story was gradually pieced together as I read on.

This book had me intrigued from the very beginning, and as more and more mystery was loaded into the story, I gradually became more gripped. I remember wishing I had more time in my week to read, just so that I could sit down and swallow this story as quickly as I could.

I would happily recommend this book! 😀

4 thoughts on “Vicious by V.E. Schwab”