Guys…I know I just did a pretty big book haul yesterday…but I went out earlier today and got three more with a gift card I was given for Christmas!

You can never have too many books, right?

If you haven’t already, you should check out Part 1 of my December Book Haul, where I show you the books I bought before Christmas, and the ones I received on Christmas Day!

So here is my December book haul…part 2! 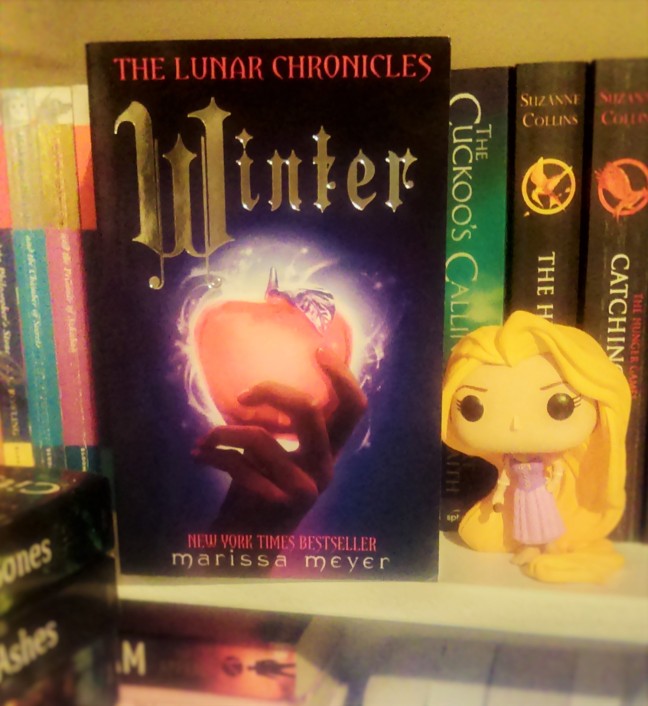 So…funny story. Just this morning on my Book Fangirling Blog Award post, I had a little rant about how I didn’t want to buy Winter until I had Fairest, because I want to read the novella before the last book. But while out today, I decided to finally just get the last book, so that when I do eventually buy Fairest, I can jump straight in and marathon both. I still can’t get over how huge this book is!

Also – I thought I’d include my Rapunzel Pop Vinyl Figurine in this photo, since this book series is based on fairy tale retellings. Isn’t she cute ❤

I’ve been eyeing up this book for a while now. Historical fiction mixed with fantasy? Give it me right now! I believe this book is based around the time of Hitler’s rise of power. A competition takes place, the winner’s prize being a meeting with Hitler himself. The main character enters this competition to get close enough to kill Hitler. Oh, and shapeshifting into wolves is a thing too. That’s how I keep hearing it being described, and to me that just sounds like such a unique idea. I can’t wait to read it!

Since I received Siege and Storm – the 2nd book in the Grisha trilogy – for Christmas, I decided to pick up the final book in the trilogy while I was out so that I can marathon them. I absolutely LOVE the cover of this book so much!

So there’s the second part of my December book haul!

I did originally plan to save these books for a January book haul…but I didn’t know if I would actually buy any other books in January so I didn’t want to wait. Plus I wanted to share the news because I’M SO EXCITED ABOUT HAVING NEW BOOKS!

Do you plan on buying any more books after Christmas?

9 thoughts on “December Book Haul Part 2…I bought more with a gift card!”