*All my reviews are spoiler free*

So, here’s me thinking I would have to wait ages to get this book. Only to find out my local Waterstones were selling early copies! And my lovely boyfriend very kindly bought me a copy after seeing how excited I got 😀 So I had to read it straight away, and started it the very next day.

I finished this book on Wednesday, so here’s my review…

Let’s talk about The Sleeping Prince! 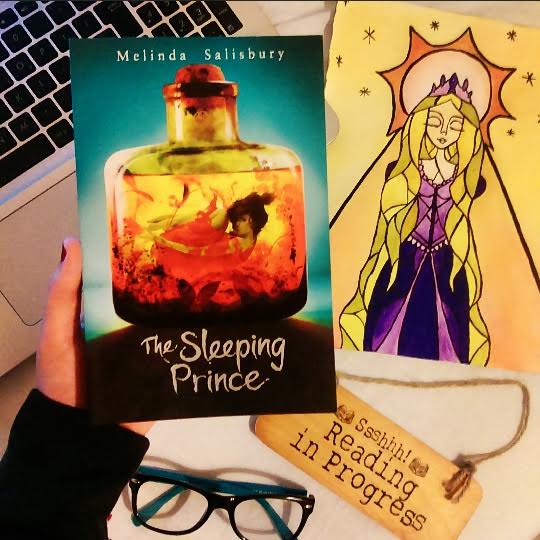 Series Status: The 2nd book in the Sin-Eater’s Daughter series

If you haven’t read the first book, skip the synopsis as it may contain spoilers, and go ahead to the review!

(Found on back cover, for a different version of the synopsis, visit the Goodreads page)

Errin knows the old story well: the Sleeping Prince, who rises from his slumber every hundred years to wreak horror and bloodshed. She just never imagined he was real.

As this terrifying enemy rises and a war begins, Erin is forced to flee. With no one to turn to, her only hope is the mysterious Silas, a man whose face she has never even seen…

I don’t even know how to put my thoughts into words after that gem of book. I’m still trying to get over the ending.

But why talk about the ending at the beginning of a review? That’s not how I do things here.

(And let’s be honest, I won’t say much about the ending anyway because spoilersssss)

Originally I was a bit confused when starting this book. All the characters were new, we were in a new setting, and a new situation. I was skeptical about how well it would link to the first book. But let me tell you right now, I was very impressed. Seeing the same world but through a different character’s eyes helped the story seem original and almost new, while still having that air of familiarity surrounding it. And the thrill that caught me whenever a link between the characters or stories was discovered…it was like one of those light bulb moments, where you it suddenly clicks and you just have to go “OH I see it!”

The folklore and fairy tale side to this I found particularly interesting. It almost seemed like a fairy tale retelling book, apart from it wasn’t. I mean, it has one thing in common with Sleeping Beauty, with the whole sleep-for-a-really-long-time thing, but that’s about it. This whole world of folklore was invented to create a convincing story, and my love for fairy tales made this even more enchanting to me.

I actually really liked all the characters, new and old. Yes – I said “and old”. Although this book is based on a new cast, it is a series and we have some old links arrive in this book too. So don’t fret, fans of the first book. You’ll get to find out what happened after.

One thing I picked up on especially in this book was Melinda Salisbury’s writing style. When she describes things, to me it goes unnoticed…but in a good way. She chooses her words so well, that it only takes a few sentences to fully describe a scene, rather than laying on a huge over-the-top paragraph that drags on. So without me even realizing, she manages to draw a scene so vividly in my head, while I speed through the words wanting more.

And let me tell you, “wanting more” is exactly the phrase I’d use now. Seriously, WHAT WAS THAT ENDING?!? It was so fast paced I didn’t dare blink in case I somehow missed a bit. All the emotions were tugged and pulled in different directions and making me frantic to know more! I can’t believe I now have to wait once again for the next book *cries*. At least I can stare at the pretty cover all year while I wait. That might distract me from those last few pages *sigh*

This book is very close to being one of my favourites, and I feel like if Melinda Salisbury keeps it up, her next book might just be up there.

Have you read The Sin-Eater’s Daughter? Is this book on your TBR?

4 thoughts on “The Sleeping Prince by Melinda Salisbury”