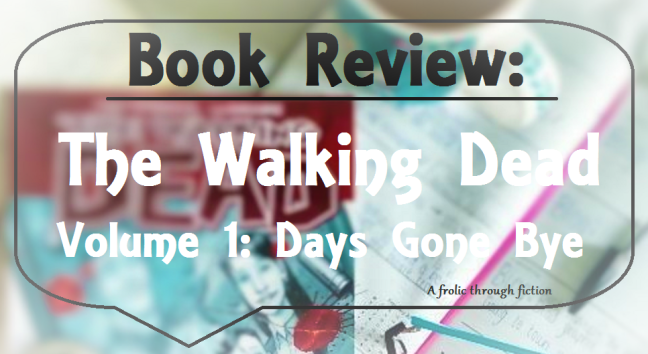 *All reviews are spoiler free*

Since it felt like it took me a while to reread A Darker Shade of Magic, I decided to pick up a graphic novel – this one being The Walking Dead.

Now, I don’t watch TV that often, so I’ve not seen the The Walking Dead TV series. All I know is that it’s quite popular, to say the least. And since I’ve been getting into graphic novels lately, I decided to go about learning the story this way.

I’m not too great at reviewing graphic novels yet, I find it quite difficult since they’re so short, so please bare with me!

So let’s talk about The Walking Dead! 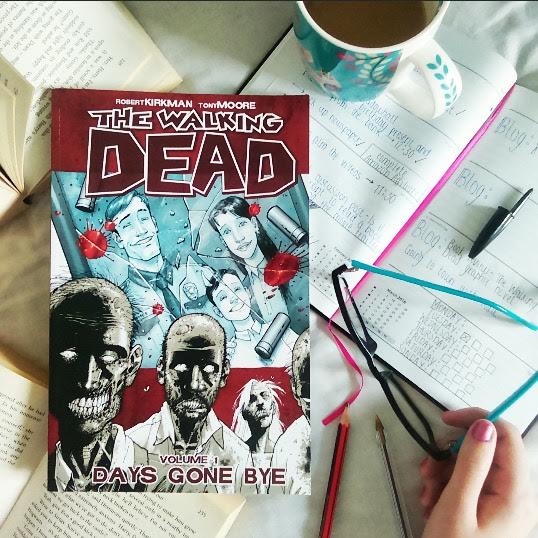 Series Status: The 1st in a series

How many hours are in a day when you don’t spend half of them watching television?

When is the last time any of us REALLY worked to get something we wanted?

How long has it been since any of us really NEEDED something that we WANTED?

The world we knew is gone.

The world of commerce and frivolous necessity has been replaced by a world of survival and responsibility.

An epidemic of apocalyptic proportions has swept the globe causing the dead to rise and feed on the living.

In a matter of months society has crumbled.
no government, no grocery stores, no mail delivery, no cable TV.

In a world ruled by the dead, we are forced to finally start living.

I feel like with this book you can definitely tell it’s just the beginning of a very long series. Yes, quite a lot happens in this volume, but there just seems to be a bigger story looming overhead while you read, so it kind of feels like this volume is just setting up the background for the rest of the series.

Saying that though, you don’t actually know that much background to what happened. You’re just sort of thrown into this situation, and have to go along with the characters as they go through it. All the confusion and mayhem and will to survive is evident – that’s for sure. This all makes the story seems believable. I had no trouble imagining this could actually happen, thanks to the way the characters reacted throughout.

I was surprised by how much I enjoyed it to be honest, since I don’t usually find Zombies that interesting. I don’t understand why people find them scary – they don’t exactly move fast, all you have to do in run down the road and you’ve lost them. But this graphic novel is helping me understand why – in reality – this situation would actually be a lot scarier than you’d think. Again, I think that’s more to do with how well drawn the character’s reactions are.

Speaking of drawing, I really like the art style. Black and white, with a sketchy sort of style, there’s a lot of detail involved. I feel like it wouldn’t have worked as well if it was in colour, because of the amount of detail in each frame, so I’m glad it’s just black and white.

One thing I just want to add – if you don’t like goriness or violence, this graphic novel is not for you. Because there’s a lot of gore. And I mean, A LOT.

Although I feel like this volume is just a base for the rest of the series to leap from, it’s definitely intrigued me enough to want the next volume.

Let me know what you think in the comments!

Do you read graphic novels? Have you read this one?

Or is it on your TBR?