So today I bring you this spontaneous post because…

THERE’S BEEN A COVER REVEAL FOR THE UK EDITION OF THIS SAVAGE SONG BY VE SCHWAB.

So here it is…

So what do you think?

Yes, it’s quite plain. But somehow I think the font and the small black-water-rose-design-thing makes it work (I’m SO good with words). And I feel like it really fits in with her other book designs, with the red and white, even though they’re not part of the same series.

I’m one of those people that really appreciates small details, so the way the writing breaks off into spikes and the “g” curls into the rose stem, while the liquid is doing it’s own thing and just spilling over the left side of the cover…UGH I love it.

I have to admit I do like the other cover slightly more, mainly because of the lettering, BUT i really believe that once I have my own paperback copy, I’ll fall in love with it. I mean, if I like it already, my opinion can only improve once I actually own it, right?

I’m actually really intrigued to see how the cover relates to the story. Why is there a rose? Why the black liquid stuff? Are they relevant?

On the announcement post there was an excerpt from the book, so click here if you want to read that (it’s really intriguing, let me tell you).

The city of Verity has been overrun with monsters, born from the worst of human evil. In North Verity, the Corsai and the Malchai run free. Under the rule of Callum Harker, the monsters kill any human who has not paid for protection. In the South, Henry Flynn hunts the monsters who cross the border into his territory, aided by the most dangerous and darkest monsters of them all—the Sunai, dark creatures who use music to steal their victim’s souls.

As one of only three Sunai in existence, August Flynn has always wanted to play a bigger role in the war between the north and the south. When the chance arises to keep an eye on Kate Harker, daughter of the leader of North Verity, August jumps on it.
When Kate discovers August’s secret, the pair find themselves running for their lives and battling monsters from both sides of the wall. As the city dissolves into chaos, it’s up to them to foster a peace between monsters and humans.

A unique, fast-paced adventure that looks at the monsters we face every day—including the monster within. 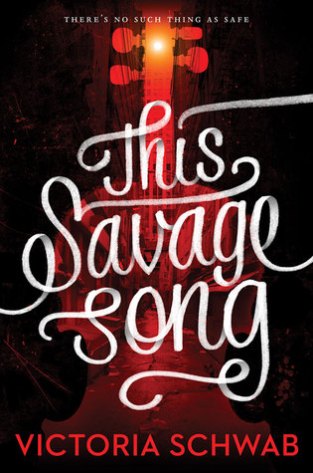 Let me know what you think!

Which of the two covers do you prefer?

Which will you be buying?

Are you excited for the book – Is it on your TBR?

5 thoughts on “Cover Reveal: UK Edition of This Savage Song by V.E. Schwab”