I finished this book yesterday, so instead of waiting aaaaaaaaaaaaaaaallllll the way until Friday for the review, since that’s my usual review day, I decided to post it today.

So let’s talk about All The Bright Places! 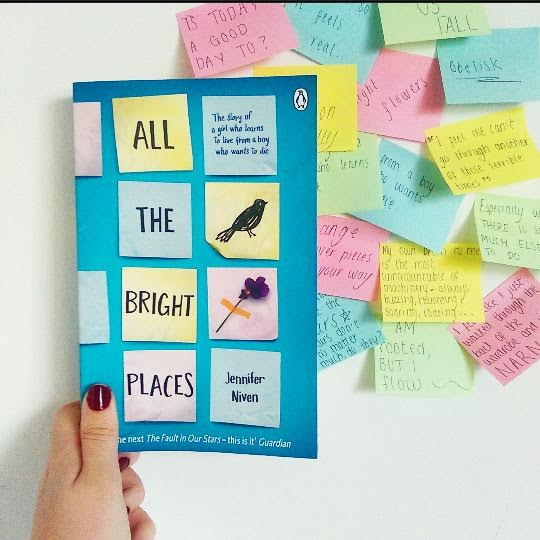 Title: All The Bright Places

(From back cover. More detailed synopsis on Goodreads)

Theodore Finch wants to take his own life.

Violet Markey is devastated by her sister’s death.

They meet on the ledge of the school bell tower, and so their story begins. It’s only together they can be themselves…

But as Violet’s world grows, Finch’s begins to shrink. How far will Violet go to save the boy she has come to love?

After finishing, I couldn’t speak for a good few minutes. I just sat in silence, thinking over what just happened.

But let’s start from the beginning…

Because at first I honestly didn’t think I was going to enjoy this book. Right off the bat, some of the characters say such selfish comments, and I wanted to throw the book right out the window because what the actual hell? And then there was Finch, who seemed a lot like a John Green pretentious sort of teenager character – can recite poetry and random facts and never quite fits in anywhere because they’re “quirky”.

But ohhhhhh how wrong was I.

For one thing, my thoughts on Finch changed pretty quickly. I found it really interesting to read his chapters, and discover how that mind of his works. There seemed to be almost this air of mystery surrounding him. I wanted to know his past. I wanted to know what he was thinking. And these facts are given out in bite-size pieces, so gradually through the book you fit it all together like a jigsaw. And suddenly…it all clicks.

What I really appreciated about this book is how realistic it seems. I mean, I can’t imagine anyone actually being as spontaneous as some of the characters are in the book, but who knows. The teenage characters had teenage problems – angry parents, worrying about college – that kind of thing. And then there was the way aftermaths were described. How feelings were described. From my own experiences, I could say wholeheartedly that Violet’s reactions were pretty spot on. And with the mental illness aspect broken down and introduced bit by bit, I had no problem understanding what was going on, and even felt enlightened when I finished the book.

I sped through the last half of the novel. It’s hard not to. Especially once I got to this one event, which I did not expect AT ALL. My goodness I didn’t stop reading once I read that.

With this book being so raw and realistic, it’s hard not to be stunned into silence once you finish it.

Have you read this book? What did you think? Agree with anything I said?