As I’ve said countless times, I have this really bad habit of starting book series and then taking years to finish them.

So much so, that now I have over 20 book series on the go.

I made a list of all the series I’ve started so that I can keep track of every single one, and when it comes to buying more books, I’ll be more likely to look at the list and choose a series to continue.

This “list” of mine turned into a doodle session. I love making my notebook look more interesting – I showed you guys in my review process how I like to draw the book titles for my review notes. So this time, instead of this being a mere list that I wouldn’t look at again, I decided to draw the titles as book spines, and every time I finish a series, the spine will be coloured in.

In the second half of the post I’ll list all the book series I need to finish – split into three sections. Just so that you guys can see more clearly 🙂

So let me show you the book series I need to finish…and how I doodled!

So I had my list of books. I had my notebook. I had my pen. And that’s pretty much all I needed.

Oh, and my bookcases nearby so I could copy the fonts on the book spines.

I planned for every book spine to be two lines deep, so every title was drawn through the middle. I drew every title with a similar font to the ones used on the actual book spines, just to make the page look that little bit more interesting when finished.

When each title was written (or drawn), all I did then was drawn a curved line around the end, and two lines along the top and bottom to surround the title. 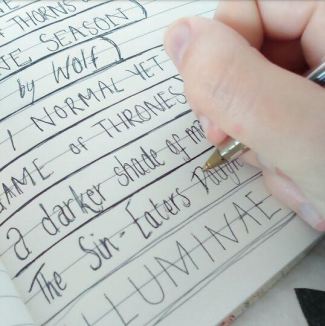 I went over every title twice, just to make it that little bit darker. I had quite a messy way of doing this, since it’s just a doodle so I don’t mind it looking sketchy.

I mean, you can see the difference here. The top two have been drawn twice, while the rest only once. The lined paper made it hard to see all the lines, so I basically just scribbled over it all again 🙂 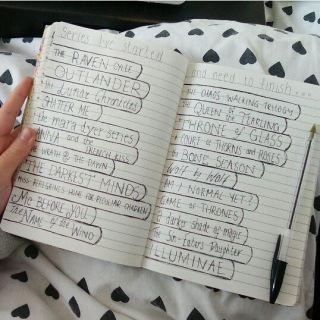 And that my friends, is it! Really simple and easy to do, but it really does just add something a little bit more interesting to my notebook.

As I mentioned before, every time I finish one of the series drawn on these pages, I’ll colour it in, so over time these pages will gradually become more and more colourful. Plus it’ll feel like more of an accomplishment, being able to visualize how many of the series I finished 😀

Since not all the pages are shown, or the titles might be hard to read…

here’s a list of the book series I need to finish!

“You have no excuses!”

Series that have the next book I need to read already published, but for some reason I still haven’t gotten round to reading it.

The Raven Cycle by Maggie Stiefvater

The Lunar Chronicles by Marissa Meyer

Shatter Me by Tahereh Mafi

The Anna and the French Kiss series by Stephanie Perkins

The Wrath and the Dawn by Renee Ahdieh

The Darkest Minds by Alexandra Bracken

Me Before You by Jojo Moyes

The Name of the Wind by Patrick Rothfuss

The Queen of the Tearling by Erika Johansen

“OK you actually have an excuse here”

The series that I am actually caught up on, but haven’t yet finished because the next book isn’t out yet.

A Court of Thorns and Roses by Sarah J Maas

The Bone Season by Samantha Shannon

Wolf by Wolf by Ryan Graudin

Am I Normal Yet? by Holly Bourne

A Darker Shade of Magic by VE Schwab

“That’s right, start a new one and add more to the list above”

The series I actually haven’t yet started, but I own at least one book of and plan on reading some point soon.

Daughter of Smoke and Bone by Laini Taylor

To all the boys I’ve loved before by Jenny Han

Those are all the book series I’ve started and have yet to finish. I told you there was a lot 😀

Hopefully I’ll actually get through some of these series soon. I’m going to start The Raven King today so at least The Raven Cycle can be crossed off soon!

How many book series have you started?

Do you like to finish a series before starting another one, or are you like me and just try to read everything at once?

Are there any series here I should prioritise? Which ones?

What do you think of my doodle idea? Let me know if you end up doodling your own!

Leave your thoughts in the comments!

Come and Visit me!