I am sorry in advance if you don’t like this review. BECAUSE I KNOW HOW WELL LOVED THIS BOOK IS.

But I promise you, it’s not a bad review. It does still have a good rating. It’s just…not as amazing as everyone else’s.

Let’s talk about I’ll Give You The Sun! 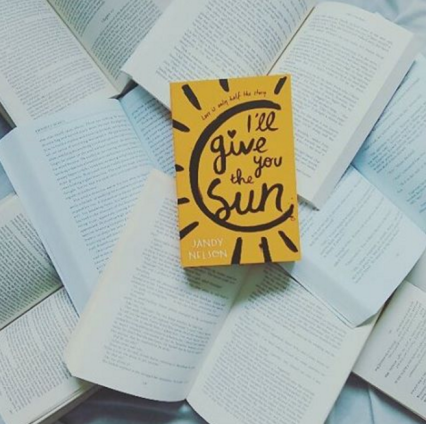 Title: I’ll Give You The Sun

Jude and her twin Noah were incredibly close – until a tragedy drove them apart, and now they are barely speaking. Then Jude meets a cocky, broken, beautiful boy as well as a captivating new mentor, both of whom may just need her as much as she needs them. What the twins don’t realize is that each of them has only half the story and if they can just find their way back to one another, they have a chance to remake their world.

“Hey Ashleigh, how does it feel to be in the 1% of the population that doesn’t absolutely adore this book?”

Pretty odd actually. Because I was so convinced I’d love it.

Don’t get me wrong, I liked it. But that’s my point. It’s good, it served its purpose, but unfortunately I fell for the “too much hype” demon that can take over our reader minds.

I can definitely see why so many people would love this book. I mean, it does tackle so many issues and feelings. There’s the LGBTQ+ aspect to start with, the complicated family life, the loss of a loved one etc etc. And I did appreciate that a lot.  Of course I did. Especially that last one. Every issue was handled in a realistic and respectful way, making them a normal part of everyday life. And if one of the issues isn’t a part of your everyday life? Well, you’d have no problem understanding what it feels like to go through with this book.

“No one tells you how gone gone really is, or how long it lasts.”

The good thing is, I know exactly what it was that put me off this book. That’s a good thing? Yes, because I can explain myself.

For one, how the story is told really added a lot of confusion for me. Not in the I-don’t-understand-what’s-going-on sense, more in a why-in-the-world-is-this-happening sense. There’s such an abundance of over-active imagination in this writing. Doesn’t sound like a bad thing, I know. But when normal scenes are suddenly described as some sort of imagined fantasy world, I’d just think “wait what?“. I mean, one minute the scene would be ordinary, the next, this is happening:

“He floated into the air high above the sleeping forest, his green hat spinning a few feet above his head. In his hand was the open suitcase and out of it spilled a whole sky of stars.”

But oh wait no, they just imagined it. My bad. And when each character is calling themselves crazy every so often, I actually started to wonder whether this book is about some sort of mental illness or whether it’s just because both characters are artists and are constantly imagining paintings etc. Apparently it’s not mental illness, it’s a lot of imagination. But the fact that I wasn’t sure until I looked through the genres really unnerved me, and made me feel a bit awful, because I feel like I should’ve known the difference.

I know the imagination stuff is probably why most people love it. Maybe it’s just a lack of imagination on my behalf (though I highly doubt it, since I practically have my own fantasy world going on in my head). Either way, not for me.

The other thing? So many bad events. Again, I know this is probably a good thing because so many issues are tackled and YES OF COURSE THAT’S GOOD. But I think it just overwhelmed me a little bit because both characters focused on the bad things so much, so the entire book just seemed like a bit of a grey cloud.

But like I said, I DID ENJOY THIS BOOK. I know I just went on a not-so-good ramble. But I just feel like I needed to explain it.

One thing that always interested me was the difference in formatting every so often. I seem to have a thing for interesting formats, so the paint splatters, painting titles and superstitious notes embedded all the way through were intriguing to me. They also added the personality of each character to the pages, depending who’s point of view you’re reading from.

And wow, do I get it. This is such a complicated family story, full of betrayal and lies, love and loss, anger and forgiveness. Nothing failed to shock me. Somehow I never found myself thinking something else was going to happen, so then it’d hit me full force and I had no choice but to continue on to see what happens. I especially didn’t expect all the characters to connect up as they did.

I just wish this book hadn’t been hyped up to me quite as much as it had been. Yes, I enjoyed it. I don’t regret reading it. I’m giving it a good rating. I just don’t think it was as phenomenally groundbreaking as everyone else seems to think, unfortunately.

[Available in Hardback, Paperback (quite cheap), Audiobook and Kindle Edition]

Agree with anything in my review?