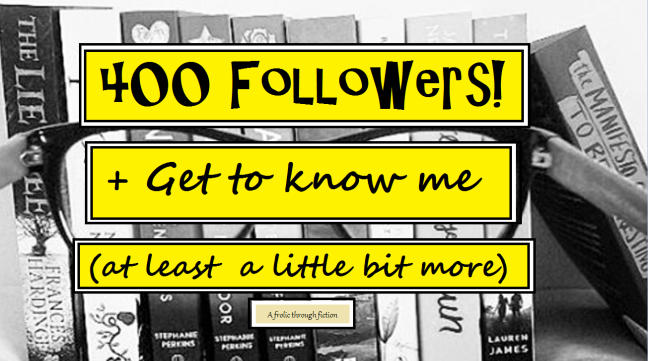 A FROLIC THROUGH FICTION REACHED 400 FOLLOWERS!

Thank you all so so much for supporting my blog! It means so much to me!

I know I know I know that numbers aren’t the important thing, and that’s so true to me. But knowing there’s so many of you guys out there enjoying my blog is so encouraging for me 😀

Especially the people who comment on here, or talk to me on Twitter, or even go as far as sharing my posts on twitter! I can’t believe some of you actually take time out of your day to talk to little ol’ me 😆 It honestly blows my mind, and I couldn’t appreciate it more ❤

At the beginning of the year I set a “goal” to reach 500 by the end of the year, just as something fun to hope for. I didn’t really think that was possible…but now it sort of does. Let’s see where this little blog of mine will be in another 6 months! Also, if I can find a good video editor app for my phone or laptop, I’ve *hopefully* got something exciting planned for when I reach another milestone! *fingers crossed*

Thank you all so much. SO MUCH. I can’t thank you enough!

And since so many of you are new here, I’ve done the Get To Know Me Tag below, just in case you want to find out a little bit more about me (though most of you know a lot about me already 😀 ) Even if you DO know me, this looked like a fun tag anyway and it’s quick to read through, so enjoy!

This first section isn’t part of the original tag, but I feel like I needed to explain my personality a bit first!

Personality: I’m very much a daydreamer. I like looking for small magics in the world, meaning I imagine fantasy stories to suit where I am. I’ll see a hollow in a tree, and imagine it as a faerie’s hideaway. I can’t sit still for long, even when reading. I’m really quite opinionated, which can sometimes lead to me ranting on Twitter (though I’m sure they’re fun to read). I’ve adored Harry Potter since I was 6 years old (I’m now 18). I’m a Slytherin from the old Pottermore, but the new Pottermore says Gryffindor.I still stick to Slytherin…or just say Slytherdor 😀 My Ilvermorny house is Thunderbird. I’m appreciative of simple things. Very sarcastic. I unknowingly death glare everyone. Real girly girl. Love makeup but don’t wear much (usually concealer, powder, eyebrows and mascara. Maybe eyeliner). I have an awful nail biting habit that annoys the hell out of me. And I love drawing, painting and DIY.

Nicknames: I don’t really have one. No nickname seems to suit me. Some people call me “Ash” if they can’t be bothered to say/type my full name, but the name Ash really doesn’t suit me. My dad did try to give me the nickname AJ (my name is Ashleigh-Jade, so it’s the initials) but that sort of failed too.

Occupation: Still a student in college, though hoping to get a part-time job at some point.

Hair Colour: Light brown (though my hairdresser friend says it’s “multi-tonal” so it’s about 5 different colours in one)

Hair Length: Just a bit below my collar bone

Braces: No, but I had them a couple of years ago.

Piercings: Just the usual ear ones.

Right or Left: Right handed to write. BUT I do rely on my left had more for some reason, and can draw left handed. It’s weird.

Real Holiday: I haven’t actually been on that many holidays…only a couple. And never abroad. The first was a caravan in Skegness. But the first time I left England was to visit Scotland last Summer, and I’ve been craving to go back ever since I left!

Best Friend: My first best friend I can’t actually remember when we became friends because I was that young. We were friends for years, but we don’t talk anymore.

Award: My first award was actually for reading, I think. When I was younger I used to take part in these reading challenges, to read a certain amount in a week, and we got awards for completing them. Other than that, I received an art award when I was really young.

Sport: I have no idea. We didn’t really have specific sports in school.

Concert: I’ve never actually been to a concert.

Film: The Harry Potter films, Beauty and the Beast and Tangled.

TV show: I don’t watch TV and Films that often, but my favourite TV show is Game of Thrones.

Song: Anything Disney, Ne Me Quitte by Regina Spektor, and Moonlight by Ariana Grande. I’m really picky when it comes to music, so these have been favourites for ages now.

Restaurant: I don’t have a one

Books:  The Harry Potters, all Sarah J Maas books, The Book Thief, the A Song Of Ice And Fire series… there’s loads. But here, my favourites shelf is featured on my Goodreads page!

Shoes: Boots. I wear them whenever I can.

Feeling: Delighted about my blog! Though also a bit…nervous? because after this I’ll be editing my CV and seeing if there’s any part time jobs I can apply for online, and anything job related puts me on edge.

Eating: Nothing right now. Though I do need to get dinner.

Thinking About: Everything. My mind goes a million miles an hour.

Watching: Daytime TV is on in the background while I write this, if that counts? For something more specific…I’m about 4 episodes into Game of Thrones Season 6.

Want Children: I don’t think about the future often, because like the job thing, it puts me on edge…but I’ve never imagined myself NOT having a child. So I guess so in the FAR future. Not anytime soon, no no no.

Want To Be Married: I guess so. I like the idea.

Careers In Mind: No idea, and that scares the living daylights out of me. I’m studying a course in journalism so maybe something related to that. Though I’d love to work in a Publishing company.

Where You Want To Live: In the same city I’m in now probably. Nice house, the inside will probably look a lot like 300 Fox Way (for anyone that’s read The Raven Boys) with ornaments, candles, signs, things everywhere. And a personal library.

God: Not personally, no.

Love At First Sight: No. Attraction, maybe. Not love.

Ghosts: This is where I go on a ramble. Yes, absolutely. I believe I’ve seen one too, and it was honestly terrifying. I was younger, and you know when it’s dark outside and you can see reflections in windows? I was pretending to sing to a crowd, looking at the reflection in the window. Through the reflection, I saw a man walk behind me. He wore old-ish clothing. And he walked right behind me, and just seemed to vanish when he got to the wall beside me. When I saw it I just froze completely and didn’t move for a good few minutes while I tried to process what happened. Then I fell onto the floor and started screaming for my mum and dad (I was literally about 9 or something). I don’t think my dad believed me, but my mum did because we always had things moving around our house that she’d try to blame on me and realized it couldn’t be explained that way – plates going missing and turning up in places I can’t reach etc – and she could see how shaken I was. There’s been a time too where the dog I had at the time started reacting to something I couldn’t see, just barking at a random wall in my house, then when I went upstairs my cat was doing the same thing but one level up in the house. Yes, I do believe in ghosts basically. And all that will sound ridiculous if you don’t 😆

Aliens: Yes! We can’t be the only living things in all the universes. Also, it really bugs me how people are like “there’s no water on this planet so there can’t be life here.” Excuse me, how would you know what other life forms live from? There could be aliens that only need light to function, for all we know.

Soul Mates: Undecided. I like the idea of it though.

Kissing On A First Date: Depends how well the date went I suppose.

Yourself: Not exactly, but I’m always determined to do my best.

Thank you once again for the amazing follower milestone! ❤

Do you know any good video editor apps I’d be able to get on my phone for free? (not an iphone)

Do we have anything in common from the tag?

Is there something here you didn’t know about me before and find particularly interesting?

Do you have a ghost story of your own? I’d LOVE to hear it!

Let me know your thoughts in the comments!