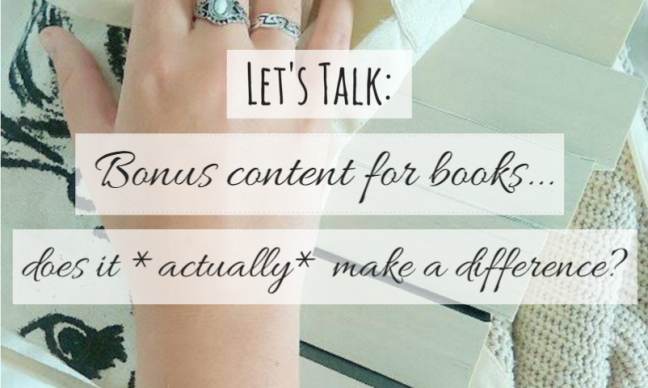 I can’t predict whether you guys will like this topic or not. It’s a bit of a strange one in the way that I’d literally not thought about it until a certain book started bothering me for this reason.

I don’t mean preorder gifts. Those things I love. I mean, I don’t preorder things often, but it’s nice to get a little gift for doing so.

But like I said, that’s not what I mean.

I just mean content in general. Like bonus chapters, or a novella, or even a sneak peak into the first chapter of the next book. All these things that are advertised on book covers, hoping to make you buy that particular copy.

That’s what I mean. And that’s what has been bothering me lately.

Admittedly, it’s not. If I’m waiting so long for a book in a favourite series to come out, I want as much content as I can get.

Which is kind of where the problem lies. Because I honestly think that “bonus content” has turned into a “who can sell more of this book” battle between stores.

This has basically come to mind because of Sarah J Maas’ next book, Empire of Storms. Oh how I love the series, and I’ve been waiting for this book for a year. So I should be thrilled about having some more of the story, right?

Well it would…if there weren’t so many different versions of it.

But my point is, there’s all these options…but why? What’s the point? Why can’t all these different bonus content stories be smushed together and published as a novella? Surely we’d be more excited for that?

All these different “bonus contents” no longer sound like something we have as a treat. It sounds like all the different stores are trying to win us over – which, granted, is their job. Of course they want to earn as much money as they can. But it’d just be so much nicer if there was ONE bonus content story, sold in whichever specific shops want it. They’d still earn money compared to the bookstores that don’t have it, and all of us who want as much content as possible will be able to get it, without worrying we’re missing part of the story.

Would I buy a book purely because it has extra content? No.

Would I want the extra content if I was a diehard fangirl of the book? Absolutely.

Does it actually make a difference when it comes to whether I will buy the book or not? No.

Will it make me buy the book from a different store? Only if I liked the store in the first place. Otherwise, I’ll stick to the ones I usually go to.

I’m aware I just sound like a rambling mess right now, complaining about something petty. Sure, it might seem pathetic to some that I’ll complain about not having a few extra pages.

But when bonus content is announced, that means there’s extra little details to the story. Even if it’s just a few pages, it could make a world of difference. And after waiting a year for the book to be released, I don’t want to feel like I’m still missing part of the story, because the people who bought a different edition are talking about that little extra bit.

It’s not nice feeling like you’re missing out on something you love so much.

Other than that, I DO love bonus content. It’s always nice knowing you can get a little bit extra. Honestly, I wouldn’t buy a book purely because it has bonus content unless I REALLY love it, but still. It’s nice.

Now it’s your turn to join the discussion!

What do you think of bonus content? Would you get excited about a book you having some?

Would it bother you to know there’s different versions, and you might be missing out on one?

Has this sort of thing happened to you? Have you ever had to debate about which edition to buy because they all offered different things?

Join the discussion in the comments!

43 thoughts on “Let’s Talk: Bonus content for books…does it *actually* make a difference?”