Oh, how the premise of thing book intrigued me so. I mean, it’s described as a SciFi novel with a Gossip Girl feel to it – how could I not wonder about that?

I actually didn’t think I’d be able to get this book for a very long while, since I’m on a book buying ban basically until Christmas (pray for me), but then the lovely people at SocialBookCo contacted me through their review programme, asking if I would like to review this for them. So of course, I said yes!

This is the 2nd book I’ve reviewed for them, so you’d think I’d have come up with a better way of explaining the site by now – but basically This is a site that compares all the different prices of books from different retailers, showing you where you can buy each book for the cheapest price. And then there’s the reviewing side – If you join their programme, there are opportunities for you to be sent books for free in exchange for an honest review by a given date. So check it out if you’re interested!

But enough with the rambling…

Let’s talk about The Thousandth Floor! 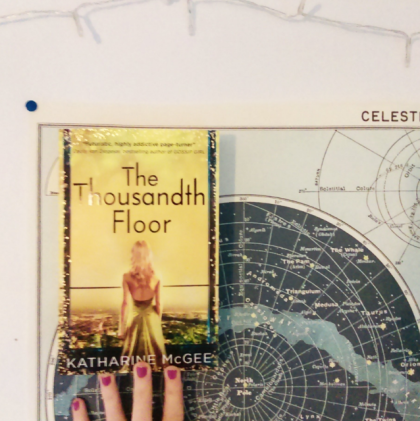 Series Status: The 1st book in a series

(Synopsis found on back cover – view different version on Goodreads)

The higher you are, the further you fall.

A metropolis of innovation and dreams, where everyone wants something…and everyone has something to lose.

The upper floors of the thousand-storey super-tower are home to the rich, beautiful, and ruthless. And right at the top is Avery Fuller, the genetically designed beauty with the perfect penthouse life. The girl who has it all – yet is tormented by the one thing she can never have.

Avery’s perfect world is set to come crashing down. Lies, betrayals, and secret liaisons culminate in a scandal that ensnares everyone.

When you’re this high up, there’s nowhere to go but down…

This book is definitely different from the sort of thing I read. It’s the kind of thing I’d read almost like a guilty pleasure. I’m sure, by now, that everyone has heard this book be compared to Gossip Girl or Pretty Little Liars – I haven’t watched/read either, and yet somehow I completely get that.

Set in 2118 New York, this is the story surrounding a bunch of teenagers and their varying lives in the thousand-storey mega tower – which quite frankly, I can’t comprehend. I mean, a thousand floors high, and so large there’s practically streets on each floor…what?! How?? Imagine walking past on the pavement outside and looking up in the hope of glimpsing the top. It just wouldn’t happen. You’d fall backwards from craning your neck and make a fool of yourself, really.

Anyway, that’s not the point.

The point is, this tower is basically a not-so-subtle metaphor of wealth. The higher up you live, the wealthier you are. Upper floors for the upper class. And so on and so forth. And at the very top of that social ladder is Avery. The story is…not quite centered around her, but she sort of forms the basis of the book. There’s a lot of characters to read about, but they’re all tangled in Avery’s mess in some way. While having their own messes to handle too.

Because to put it simply, this book’s story is just one huge drama.

You can’t really escape it with so many characters. At first, the characters did overwhelm me a bit since every chapter switches to a different person. But it doesn’t take too long to get the hang of them all. While I didn’t particularly like any of the characters, I found them interesting to read about. I just feel like I wouldn’t have been friends with any of them. And like I said, with this many perspectives, it’s a bit hard to miss out on the dramatics…

Those of which were a bit hit-or-miss with me. Sometimes the drama would be highly interesting and keep me gripped. Other times it would just feel like a spoilt wealthy teenager not getting their own way and kicking up a huge fuss about their reputation. And then there’s was Avery’s drama, which was just on its own level of weirdness. But altogether, I found it really entertaining to read about, and surprisingly quick to read.

My favourite thing without a doubt was the casual SciFi. Now I say “casual” because the SciFi element to it is just so normal to those who live in this world (or rather, year), that it’s just mentioned in an off-handed way like all the amazement was accepted decades ago. Which in this book, it was, so it’s perfect. But seeing that amount of technology used so casually by the general public interested me so much, I loved learning about it. Which is kind of odd, since I wouldn’t want to live there (I’d much prefer quiet countryside landscapes than a busy technology filled New York…although the contact lenses may prove convenient…).

I feel like this has been one of the most long-winded reviews I’ve written in a while. I have a lot of thoughts, all of which are just scattered around in no coherent order.

But to sum it up, this book felt like a guilty pleasure read to me – which is to say I enjoyed it a lot, even if it was an overload of drama. Sometimes you just need a load of drama, you know? The SciFi in the world fascinated me to no end, even though I’m not a particular fan of technology myself. The only reason this has lost a star in rating is purely because of personal preference – I don’t read SciFi often because it’s not a favourite of mine, though I do enjoy it sometimes. This is one of those times. And let me tell you, with the way it ended, I already can’t wait for the next book. I want to see the aftermath!

Find the lowest price on SocialBookCo

Who was your favourite character?

19 thoughts on “The Thousandth Floor by Katharine McGee | A futuristic story full of drama and money, distrust and crime”