This actually confused me slightly when it was revealed yesterday. Because Heartless by Marissa Meyer had a cover reveal…even though it already had one. I even did a blog post on that one too 😆

And yet here we are today, with another spontaneous blog post because I just feel the need to share all things bookish. Even if it happened yesterday and everyone probably already saw by now.

So here’s the UK cover of Heartless, in

I found the cover reveal over on the MyKindaBook twitter page

I was a bit hesitant towards the original cover reveal, with it being so simple, but this one takes on a more detailed approach. I love the heart shaped face in the center, and the fonts used. I do think the little slogan underneath the title looks a tad cramped, but I think that’s just because of the font used. But I do really like this cover, much more than the other edition.

Here are both editions side by side: 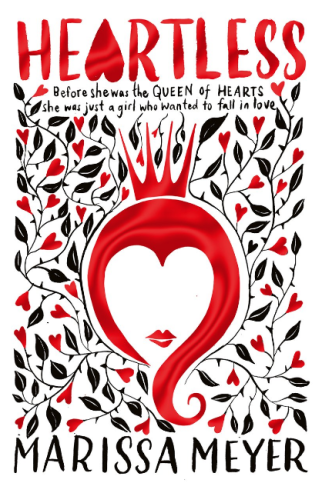 I’m glad they kept the theme of branches/vines winding all over the cover. When they’re side by side, I’m really noticing how they somehow have a different tone to them. The dark cover looks more…regal but ruthless, with swords and sharp edges everywhere, whereas the light cover doesn’t. It’s just absolutely covered in hearts and has a sort of messier look compared to the clean-cut edges of the other edition. I’m really intrigued to see what I think of the covers after I’ve read the book, just to see which one I think suits the story more.

As for release dates: in the US, it’s released in November, but not until February for us over here in the UK

So that’s the UK cover for Heartless!

What do you think of it?

What do you like? Dislike? Is there anything you’d change?

Which cover do you prefer – the US or the UK?

Which one will you be buying?

26 thoughts on “Such a “Heartless” cover reveal (geddit?) – Heartless by Marissa Meyer is having a separate UK cover? How did I not know?”