This book had been sat on my shelves for ages. I think…over a year? Maybe? And I really have no idea why, because it’s intrigued me ever since I first heard about it. But for some reason, there it sat, feeling unloved (even though it very much was, in it’s place on my shelves).

But at last, we’re here. We’ve reached the day where I actually read this book. 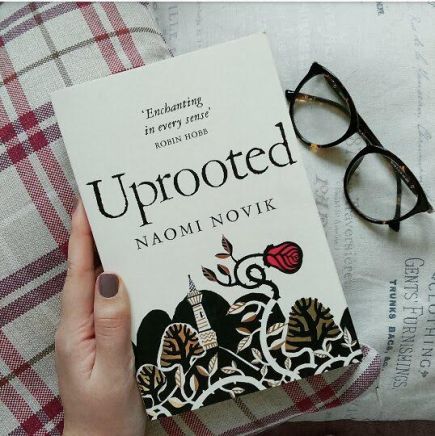 Agnieszka loves her valley home, her quiet village, the forests and the bright shining river. But the corrupted Wood stands on the border, full of malevolent power, and its shadow lies over her life. Her people rely on the cold, driven wizard known only as the Dragon to keep its powers at bay. But he demands a terrible price for his help: one young woman handed over to serve him for ten years, a fate almost as terrible as falling to the Wood. The next choosing is fast approaching, and Agnieszka is afraid. She knows – everyone knows – that the Dragon will take Kasia: beautiful, graceful, brave Kasia, all the things Agnieszka isn’t, and her dearest friend in the world. And there is no way to save her. But Agnieszka fears the wrong things. For when the Dragon comes, it is not Kasia he will choose. Uprooted is a hugely imaginative, engrossing and vivid fantasy novel, inspired by folk and fairy tales by Naomi Novik, the author of the Temeraire series. It is perfect reading for fans of Robin Hobb and Trudi Canavan.

I was quite doubtful going into this book. That much I have to admit. A standalone fantasy? HOW? Surely it’d be better as a series?

But oh no no. Now, I think if this was anything more than a standalone, it would have ruined it.

But I’m getting ahead of myself.

Let’s go back to the start. Because from the start, I was hooked. Something about the writing reminded me of a fairytale. The writing, combined maybe with the setting and overall atmosphere of the book. There was magic, but no one really understood it. It’s just a thing that exists, some people have it, most don’t.

And I found this magic to be really fascinating to read about. I do have to admit, the story was quite slow going in the first half of the book. It took a while to trudge your way through, to get to something a bit livelier. But the second you start learning more about the magic, I was gripped. I wasn’t leaving that book. I needed to see how it developed and affected the world surrounding it. I loved it.

Then we have the main character, Agniezska (pronounced Ag-nee-esh-ka. I know, it stumped me for a moment too). I really loved reading from her perspective. She didn’t turn into the face of bravery immediately. She cried sometimes. She ran away from her problems sometimes instead of facing them. She WAS a heroine, but in a different way to a lot of other YA books, where the main girl turns into this kickass gal who could run the world with a look that says “try me”. No, Agniezska shows her weaknesses. And yet, she still manages to put on a brave face and do what needs to be done. And that, I think, is much more relatable.

And the other main thing I love? The actual plot. I loved the ending, finding out the reasoning behind the problem in the book. It was such a unique story, and really felt like a fairytale to me. I had a weird warm fuzzy feeling, despite it being quite a dark book. It was odd, but I loved it. But not only that. It felt clever too. My favourite thing in books is when you can see how carefully woven together the plot is. When you see everything connect, and it would actually take you ages to explain the book to someone else just because of how complicated it can be. Uprooted has that. And I can now fondly look back on this book, thinking “I didn’t see that coming”, and smile, because of course it all makes perfect sense now.

I don’t know what else I can say about this book. I don’t particularly have anything bad to say against it – apart from maybe it was a bit too slow in the beginning, but slow books don’t often bother me too much. It’s not a favourite, but it’s definitely up close. It was dark, twisted, magical, and felt like folklore. And for that, I really, really enjoyed it!

If you haven’t, do you plan to?

Are there any books similar to this that you’d recommend?