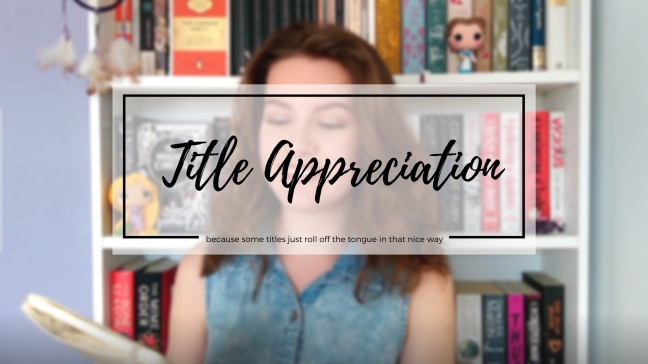 It can’t just be me that really appreciates it when a book title is just SO GOOD.

Whether it’s one of those that catches your attention, or makes no sense, or just feels really good to say, there’s always those title that you just think “YES. I LIKE YOU.”

Or…at least there is for me.

So come on, let’s have some title appreciation!

This is basically the reason this post exists. I was filming a video, and got a bit sidetracked when it came to say this title because it just rolls of the tongue in the most satisfying way. Just the “Locke Lamora” part. Go on. Try it. It’s great.

I’ve not actually read this book, despite owning it for years now. One day I will do though. Even if I can’t remember what it’s about…the name is enough.

How do shadows gather? Surely they can’t do so on their own? They need…things blocking the light. They can only gather if a group of objects/people/things were gathered too, right?

This is the second book in the A Darker Shade of Magic trilogy, all of which have titles I love. It was actually a tie in between this one and the last one – A Conjuring of Light – for me, but I went with this one in the end.

I mean, I would hardly call thunder quiet.

Sure, some rumbles are quieter than others, but they tend to take over the sky and be heard across a city so…maybe not so quiet.

This just caught my attention immediately. I’ve no idea why. It just has a nice ring to it, and I automatically wanted to know exactly how the title related to the story.

Also…kind of want to know the wind’s name now. Bruce? Gwenevieve? Spot? Is it a human name? Is it gendered?

Yes, I think through these things way too much. Though, I actually know the answer, because I’ve read the book. (Or at least…I DID know the answer. I can’t actually remember now.)

I basically just fell in love with the name “Ava Lavender”. Can I rename myself that, please? It’s such a beautiful name.

Even though this title is a pain in the backside to fit into gaps (with it being so damn long), I do love the ring of it. So many contradictions in eight words. You’ve no idea what the book might actually entail, with it being so mysterious sounding, and that suits the book perfectly.

Those are some of the book titles I always have to stop, and appreciate for a moment because they sound so damn good.

Are there any book titles you particularly love?

Have you read the ones on this list? What did you think?