I didn’t even intend on reading this one for a very long time. But I felt like I was reading slowly lately (even though I was reading at my usual speed) and wanted a quick read, and so this happened.

Let’s dive into the Fantastic Beasts and Where To Find Them screenplay! 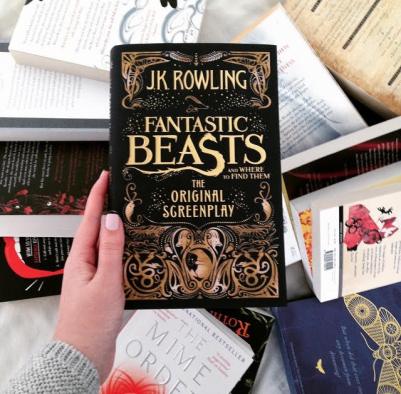 Title: Fantastic Beasts and Where To Find Them: The Original Screenplay

Series Status: A prequel screenplay to the Harry Potter series, but can be read as a standalone

J.K. Rowling invites you to explore a new era of the Wizarding World…

Explorer and Magizoologist Newt Scamander has just completed a round-the-globe trip in search of the most rare and unusual magical creatures. Arriving in New York, he intends his stay to be just a brief stopover. However, when Newt’s case is misplaced and some of Newt’s fantastic beasts escape into the city, it spells trouble for everyone…

This…is a bit of a weird one.

I love Harry Potter (along with 87% of the population). And I love the Fantastic Beasts movie.

But I’m here to review the book, not the movie.

And I know that probably doesn’t make much sense, considering this book is the script of the movie, but they just feel different, y’know?

So I’ll sing my praises first. Who doesn’t adore Newt Scamander? He is somehow the most adorable, caring, sassy-but-innocent l’il cinnamon roll of a character. I can’t get over how much I adore him. And the other characters are just as great, in their own ways. They’re all so unique – and slightly ridiculous, if I must say – but it makes for such an interesting story.

Which is probably a good thing, because the *actual* story is a bit…meh…for me.

Don’t get me wrong, I love the beasts. I love the link to the Salem witch trials. I love how we get to see the wizarding world in America. And I think we all relate to Jacob Kowalski more than we care to admit. But the actual main “problem” of the story? Nahhh. Not to bothered by it, I’m afraid.

Since it’s a screenplay too, there’s very little description going on. Which is great for a quick read, but it doesn’t feel very…magical. Atmospheric? I don’t know. I just wanted more, which I know isn’t the point of reading a screenplay, but I watched the movie first and so only seeing the dialogue felt a bit lackluster. No matter how many quirky snips of sarcasm Newt whips out.

I did enjoy it. I can say that much. It was great for a quick read, and it’s an absolutely STUNNING book to add to my Harry Potter collection. And while this rating is pretty low, that’s not to say I don’t like it. It’s just that apparently, I’m not a huge fan of screenplays. I’d rather see the entire thing in film, with all the magic for me there to see, not guess at.

Have to read this screenplay? Or seen the film? What did you think?

If you haven’t, do you plan to read/watch it?

14 thoughts on “Fantastic Beasts and Where To Find Them (Screenplay)| Good for a quick trip back into the wizarding world, but not too impressive”