*Takes out megaphone* I FINALLY READ IT GUYS YOU CAN ALL STOP YELLING AT ME ABOUT HOW GREAT IT IS.

I had a weird urge to pick this one up this month despite knowing nothing about it, as I mentioned in my April TBR video. And so that’s exactly what I did. 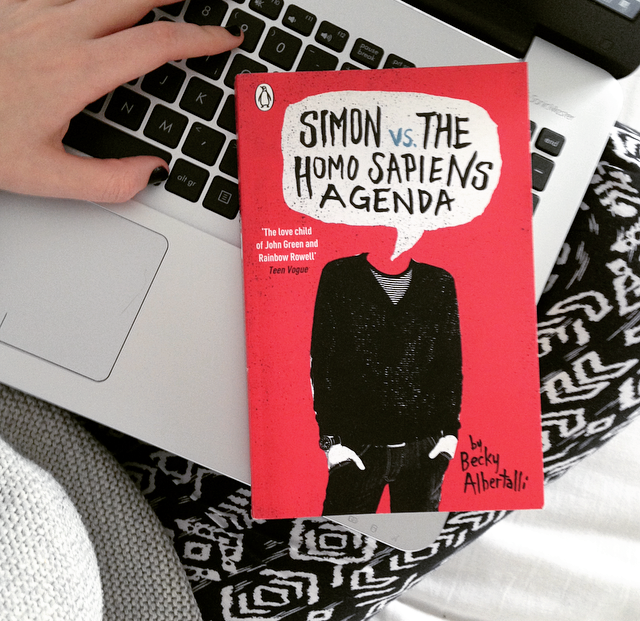 Sixteen-year-old and not-so-openly gay Simon Spier prefers to save his drama for the school musical. But when an email falls into the wrong hands, his secret is at risk of being thrust into the spotlight. Now change-averse Simon has to find a way to step out of his comfort zone before he’s pushed out—without alienating his friends, compromising himself, or fumbling a shot at happiness with the most confusing, adorable guy he’s never met.

Incredibly funny and poignant, this twenty-first-century coming-of-age, coming out story—wrapped in a geek romance—is a knockout of a debut novel by Becky Albertalli.

Well didn’t this satisfy my sudden and surprising need for contemporary? It’s not often I get one of those cravings – it’s usually fantasy all the way.

Starting out, I didn’t think I was going to like this. I was really uncomfortable with how the main relationship was introduced. One person was literally scared of telling the other how they accidentally screwed up in case they just up and left them (not a spoiler, it’s within the first few pages & mentioned in the synopsis). Something about that just…doesn’t sit right with me. I know it was probably just paranoia on their part, but being scared to tell someone you trust something in case they react badly is just a bit rocky to me.

But I did end up enjoying the book. I can’t deny that. It was so realistic. High school students using technology and social media, actually having lessons, living with parents who have authority – it’s all genuine, and yet there seems to be a lack of it in books, so it stood out to me.

Another thing that stood out to me – the diversity! Which…might seem like an obvious thing to point out, because duh, it’s about someone who’s gay. But there’s more than that too. And not in the shouty “LOOK AT ME WRITING ABOUT ALL THIS” way.  It’s just natural – rightly so – and subtle. It just IS.

Unfortunately for me though, with so many people telling me to read it and seeing so much hype in general, I was a bit let down. I don’t even know why though. I presume it’s a mix of contemporary not being a favourite genre of mine and a build up of expectations. It just didn’t really live up to those expectations for me. While I sped through it, I could have just as easily put it down and left it for a week without thinking twice. And while the plot is almost written like a mystery, with Simon trying to figure out who someone is…well, I guessed who it was the second I was introduced to them. So that was a bit unfulfilling.

But like I said, it was enjoyable nevertheless. A nice book to have if you fancy a quick read on a sunny day, is how I’d describe it. Not too serious, but engaging enough to keep you reading.

If you haven’t read it, do you plan to? Is it on your TBR?

12 thoughts on “Simon Vs The Homosapiens Agenda by Becky Albertalli | A cute, quick read that satisfied my contemporary craving”