The sudden need to learn about ancient civilisations and expand my history further than the World Wars hit me HARD in May. And so here we are, with a huge chunk of a nonfiction book about ancient Rome. 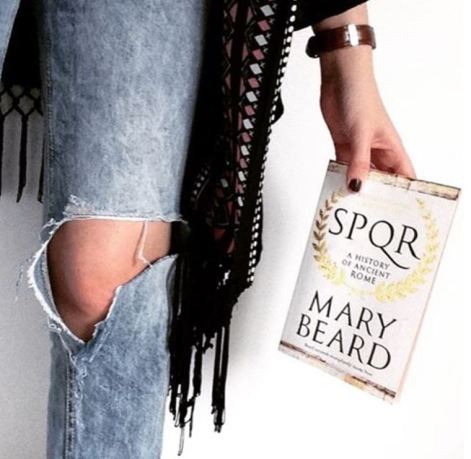 By 63 BCE the city of Rome was a sprawling, imperial metropolis of more than a million inhabitants. But how did this massive city—the seat of power for an empire that spanned from Spain to Syria—emerge from what was once an insignificant village in central Italy? In S.P.Q.R., Beard changes our historical perspective, exploring how the Romans themselves challenged the idea of imperial rule, how they responded to terrorism and revolution, and how they invented a new idea of citizenship and nation, while also keeping her eye open for those overlooked in traditional histories: women, slaves and ex-slaves, conspirators, and losers. Like the best detectives, Beard separates fact from fiction, myth and propaganda from historical record. She introduces the familiar characters of Julius Caesar, Cicero, and Nero as well as the untold, the loud women, the shrewd bakers, and the brave jokers. S.P.Q.R. promises to shape our view of Roman history for decades to come. 100 illustrations; 16 pages of color; 5 maps

I adore learning about history – but I am by no means a “history buff”. I can’t remember names and dates for the life of me. I just remember the stories and find everything absolutely fascinating.

So I was going into this book with a fairly average interest/knowledge rate. I knew vaguely of names and the fact the Roman Empire existed. I knew of the Roman Gods. Other than that, I was starting from nowhere.

And how well did it go?

Granted, I was wary at first. There’s a lot of names and dates to begin with, and I sat there thinking “oh god, it’s going to be like a textbook.” But it didn’t take long to get out of that. She sort of brushes it aside and says “but we’ll come back to that later”, and the book begins at a slower pace.

And yes, this book is a very slow read. If you’re like me, anyway (that being a sleepy book hoarding dragon). I only read a chapter or two of this each day, because I wanted to really take my time and soak in the facts. It’s not one to rush through (you might miss something!). But it doesn’t read like a textbook. It’s not a chore to read. I don’t know how, but it’s just not that way at all. The facts are there, but there’s also small hints of opinion too every so often, or reactions to the information. And I think that just made the book feel a tad more personal rather that textbook-like, which really helped get through it.

I also loved how there were so many graphics involved. Throughout, you’re shown maps, photographs, illustrations, all sorts of things that just help you imagine Ancient Rome. Not only were they interesting, but they also helped break up what would have been a massive chunk of text. Channel into my younger self’s love for picture books, oh yeah.

As for the information itself, it was very in depth. It even inspired me to write down and keep a li’l history notebook, so that I can look back and almost revise what I now know about Ancient Rome. Or rather, the rise of the Roman Empire. Where (apparently) most books are about the fall of the Roman Empire, here this one only focuses on Rome’s foundations and the rise of the empire. Which is very optimistic, I must say.

I loved reading this. It was slow going, yes, but that feeling of learning something just made me swell with happiness each time I opened the book. I’m now so excited to read stories from the days of Ancient Rome, or fiction retellings based on old stories and myths.

While I know this book really isn’t for everybody, it came to me just at the right time. I wanted to know more, and that is sure as hell what I got.

If you haven’t, do you plan to?

Are there any books relating to Ancient Rome that you’d recommend? Whether it’s nonfiction or fiction?

4 thoughts on “SPQR by Mary Beard | So much to learn, so much to read…and I loved every second”