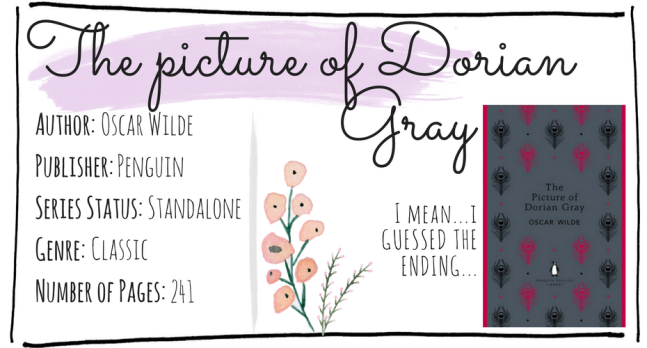 A random pick up on my part, I had zero intentions of reading this soon. But, I’m mightily happy I did, because it’s one I’ve been meaning to check of the list for an awful long while now.

Dorian Gray is a beautiful yet corrupt man. When he wishes that a perfect portrait of himself would bear the signs of ageing in his place, the picture becomes his hideous secret, as it follows Dorian’s own downward spiral into cruelty and depravity.

Enthralled by his own exquisite portrait, Dorian Gray exchanges his soul for eternal youth and beauty. Influenced by his friend Lord Henry Wotton, he is drawn into a corrupt double life; indulging his desires in secret while remaining a gentleman in the eyes of polite society. Only his portrait bears the traces of his decadence.

Forgive me for not loving this as much as everyone else seems to.

Now that’s not to say I didn’t like it. I just thought it pretty…average, is all.

I know I know. But I just…expected too much, I guess? Everyone yells about how amazing the writing is, and sure, it’s good. It’s not the sort of writing people often fear with classics, where it’s overly wordy and basically needs translating. It’s easily accessible, and granted there were a couple of times when I thought “gosh this is a bit rambly”, but it wasn’t enough to ruin the flow of the writing.

While I didn’t like any of the characters – in fact, pretty much hated all of them – they were certainly interesting enough to read about. There was just so much egotism and arrogance surrounding them all, I couldn’t really feel sorry for them regarding the events involved. Which, by the way, I can imagine being considered very dramatic for the time it was written.

But that sense of gothic literature did keep it going for me. I was so intrigued about where it would go, how the story would pan out. The unanswered questions were enough to make this a relatively quick read. I can see why a lot of people like this as a gothic book – it’s dark, it’s mysterious, without verging over to the horror side of things.

The only major thing that let it down for me, was the fact that I had guessed the ending right from the very beginning. Hence the “I expected more” feeling surrounding this entire review. But oh well. It is what it is.

Have you read any of his other works?