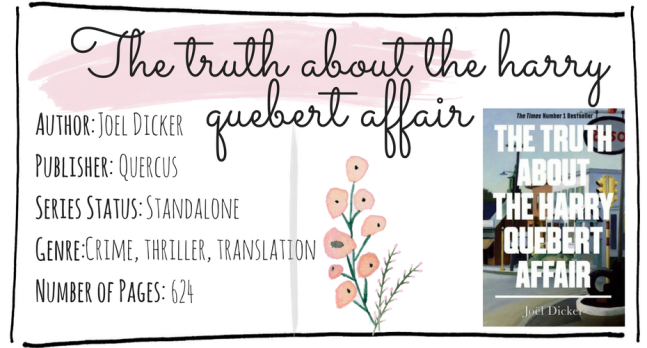 I’m not usually one to pick up crime novels, but after seeing Jess @ReadByJess rave about this one on her YouTube channel, I decided to pick it up. It’s not often they catch my eye, but for some reason this one did, so why not give it a shot?

August 30, 1975: the day fifteen-year-old Nola Kellergan is glimpsed fleeing through the woods, never to be heard from again. The day Somerset, New Hampshire, lost its innocence.

Thirty-three years later, Marcus Goldman, a successful young novelist, visits Somerset to see his mentor, Harry Quebert, one of the country’s most respected writers, and to find a cure for his writer’s block as his publisher’s deadline looms. But Marcus’s plans are violently upended when Harry is suddenly and sensationally implicated in the cold-case murder of Nola Kellergan–whom, he admits, he had an affair with. As the national media convicts Harry, Marcus launches his own investigation, following a trail of clues through his mentor’s books, the backwoods and isolated beaches of New Hampshire, and the hidden history of Somerset’s citizens and the man they hold most dear. To save Harry, his own writing career, and eventually even himself, Marcus must answer three questions, all of which are mysteriously connected: Who killed Nola Kellergan? What happened one misty morning in Somerset in the summer of 1975? And how do you write a book to save someone’s life?

While this book certainly has its fair share of split reviews, I can say that I, for one, am definitely on the more positive side of things.

There’s a book within a book. There’s writing advice at the beginning of every chapter, foreshadowing the events about to happen. And with every new chapter, the number counts down. To what? WHO KNOWS?

In case you hadn’t already guessed by the way I’m writing this, I really enjoyed this novel. Despite the main character being arrogant, and my questioning of everything he managed to access during the investigation (surely the police wouldn’t just give up key details being he said he was carrying out his own investigation?), the plot alone was enough to keep it going. Which I’m pretty sure is the ideal situation for a crime/thriller novel.

But seriously, this book. Mystery upon mystery. Not for one moment was I bored by the events or revelations. I was hooked by the story, almost aggravated by my incessant need to know. I found it impossible to string together the mystery, so many threads were straying off in different directions. And the more revealed, the more fixated I became.

Pieced together through different perspectives, the story comes together gradually but at enough of a pace to keep things intriguing. The amount of twists taken in the plot took me by surprise, and ultimately I think that’s what won me over. There was no chance I would have predicted the outcomes of events, and gaining an answer to anything was hugely satisfying.

As mentioned a bit earlier, I did find myself calling to question the plausibility though. I’m pretty sure the protagonist shouldn’t have received half the answers he gained through the police, and I wasn’t so convinced by the willingness of the other characters either. Not to mention the fact that every single person seemed to recall perfectly specific details from events thirty three years ago, or even earlier. Sure, some might. But not every single person you come into contact with.

That being said, I found it gripping enough to relentlessly turn the pages, eager to find out if the dark and twisted mystery meets any kind of closure. It was deceptive, complicated, but engaging enough to be worth a read, and I would recommend it to those of you who want an addictive read to get into.

Are there any you’d recommend that sound similar to this one?

There was an error retrieving images from Instagram. An attempt will be remade in a few minutes.