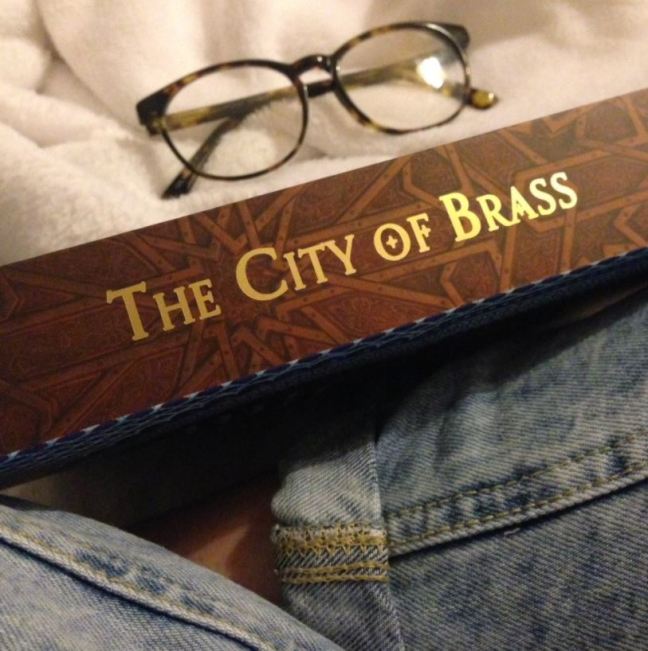 Set on the streets of 18th century Cairo before plunging us into the world of Daevabad, this is a fantasy novel I’ve been eagerly anticipating for months. Following a conwoman called Nahri, we witness her healing tricks long before she admits to them being magical – that is, until she accidentally summons a (kind of) djinn warrior in the process. Which, to be fair, would convince me too.

Now it’s been awhile since I’ve been really eager to read. I’ve enjoyed reading, yes, but nothing has left me itching to read more at every hour of the day. And then The City of Brass came along, and that dark period passed. I travelled into Nahri’s world and was instantly comforted by the rich detail I met with. Despite being mostly set in a fantasy world, Middle Eastern culture is interwoven into that world too, spanning from all things relating to clothing, languages, traditions and religions inspired by different countries and their society. And while I can in no way understand or speak reliably about it being accurate representation, this is a Muslim #OwnVoices book and I’ve seen countless reviews from bloggers/readers who do stand within that background and have raved about it, Rima’s review being the first that comes to mind.

So the world to me was endlessly fascinating. The rich details and descriptions enthralled me immediately, sending me to a place that was both magical and corrupt at the same time. With the plot taking hold of every feud possible – political feuds, family feuds, magical feuds etc etc – there wasn’t a moment spent in complete ease. Something was always around the corner, except you didn’t know which corner because there were so bloody many of them. And then whoops, you walked into it and oh no, looks like you’ll just have to keep reading to find out how you get past it now. Oh what a shame *shrugs*

But now we’re going to step aside for my fave gal Nahri. She’s without a doubt one of my new favourite characters. She’s strong and sarcastic, but you get to see her vulnerabilities too. She’s not automatically amazing at everything, you see her fearing the new (and dangerous) situations she’s thrown into as well as trying to get past self doubt. Everything about her just seemed realistic, and I genuinely admired how she accepted help when it was needed and did what needed to be done.

But it’s a dual perspective book. And for some reason I didn’t get into Ali’s perspective quite as much as Nahri’s. BUT WHY? He’s sweet and has manners and sure, is a little temperamental but actually cares enough to apologise so it’s fine. But I just can’t pinpoint it. Every time I got to a chapter from his perspective I would slow down somewhat, or eagerly anticipate seeing what happened to Nahri. Luckily, as the story went on the two perspectives started merging into the same plot, and so I ended up enjoying the dual perspective for the varying judgements it gave me on the main characters, rather than just falling into one character’s mindset (which, admittedly, I often do).

I am honestly just a little bit in awe of this book. I found it to be intense in both detail and plotline, fascinating in regards to it’s worldbuilding and character relationships, and just an absolute joy to read. I was left itching to turn every page, and I honestly can’t wait for the next book in the series. Why does the release have to be so far?!

*Thank you to the publisher for sending me an ARC of this book. This in no way affects my opinion.

Have you read this book? What did you think of it?

If you haven’t read this book, do you plan to? I’d love to know!