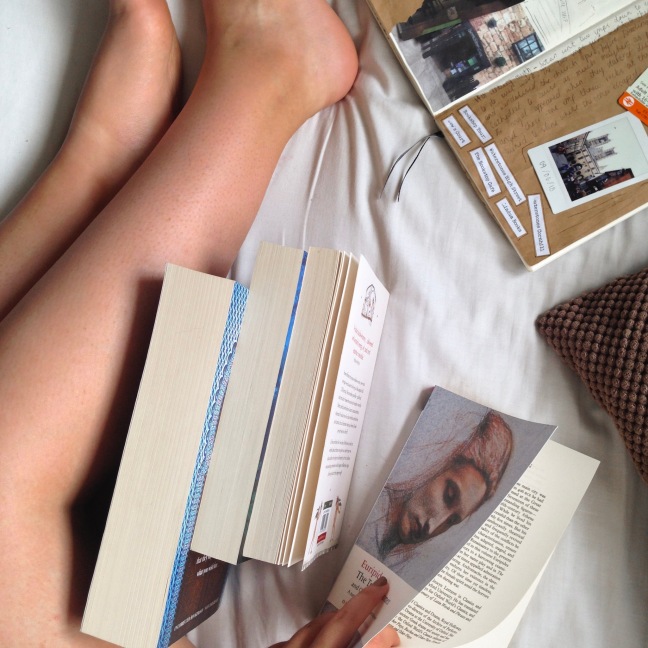 Apparently, I’ve become a harsher reviewer in 2018. I say this because now we’re in the 7th month of the year, and I haven’t rated any books 5 stars yet. None. Zero. Zilch. Why?? It’s true, I’m reluctant to give anything less than a newfound all-time fave 5 stars, but you’d figure that somewhere in the 35 books I’ve read so far this year, I’d have found one. It seems not.

Despite this, there are a few that have still stood out to me this year and have gotten close to those treasured 5 stars. I don’t think anyone will be surprised to see there’s a theme of fantasy and ancient history. But these four books are the ones currently in the running for my favourites of 2018…unless I miraculously discover a whole suitcase full of new favourites in the next 5 months between now and the end of the year. But here, (a little over) halfway through, we have my current highlights!

Following a conwoman in 17th century Cairo, Nahri doesn’t believe in magic until she accidentally summons up a djinn warrior. There is so much going on in this book, and I sped right through it. It had been a long time since a book had gripped me as hard as this one did, so that feeling of endlessly turning the pages filled my lil bookish heart with joy. Nahri was such a great character to read about, I loved the court politics that come into play, and the setting itself added a level of diversity not usually seen in YA fantasy. I wrote a whole review on this book, which you can read here if you like!

Set in a world dampened with 18 years of permanent grief – a rule enforced by the chancellor after the loss of his family – the chancellor’s daughter finally gets the chance to overtake her father’s rule. A fantasy following a teen girl taking interest in politics, be passionate about the state of her world and running in an election…is anyone surprised I loved it? Not only that, but Melinda Salisbury managed to weave together a world devoid of happiness, acking the simple smiles of everyday or even colour to brighten the surroundings. It’s such a hard thing to imagine, and yet it became normalised in the society of this book, the signs of happiness when eventually found meaning more than ever. I was so impressed by this book, and fell into it every time I picked it up, even though university work meant I had to set it down for longer periods than I’d have liked. Again, I wrote a full review for this book, which you can read here!

• The Ancient Guide To Modern Life •

Surprisingly we have a nonfiction on this list, but Natalie Haynes just won me over. This book covers many aspects of ancient history, from philosophy, entertainment, landscapes, politics and more, often comparing it to how we do things nowadays. I picked this one up because I’ve been wanting to learn more about ancient history on the whole, and it always strikes me how people talk about ancient civilisations as if we’ve come oh-so-far since then and having nothing in common with them when actually, we have a lot more in common with them than you might imagine. So this book was just perfect for me. Natalie Haynes writing was so accessible, and it honestly just felt like I was listening to a particularly interesting someone talk. I couldn’t wait to delve back into this book every time, and it’s made me so excited to read The Children of Jocasta, Haynes’ fiction retelling of the Oedipus and Antigone myth.

• The Trojan Women and Other Plays •

Containing three plays following the suffering women of the Trojan War, this one I just fully expected to love. I’ve read about the Trojan War in the typical ways – The Iliad for the end of the war and The Odyssey for Odysseus’ journey home from it – but it’s not often you get to see the women as the centre of the story. This book just felt so harrowing but in the right ways, really getting the point across about how much these poor women were suffering. I always find plays harder to connect with too, with them being so much quicker to read and less descriptive than my usual reads, and yet this still managed to pull it off for me. Surprisingly, there were small humorous moments between all the grief and tragedy too, so it was nice to see that entertainment value still upholding and being able to connect it back to the plays’ history, knowing they would’ve been performed as entertainment. It’s definitely made me want to seek out more ancient stories…though wasn’t I going to already?

Hopefully the latter half of 2018 showers me with new favourites, as I feel like the year so far has just been a bit meh. Whether I’ve just become too harsh for my own good, have been experiencing an all round slump or just haven’t found the right books, I don’t know. But these ones have gotten close, at least, so we have hope 😆

Let me know what your favourite book(s) of the year so far have been! Feel free to link me to your post/video if you’ve uploaded one about this, I’d love to see them!