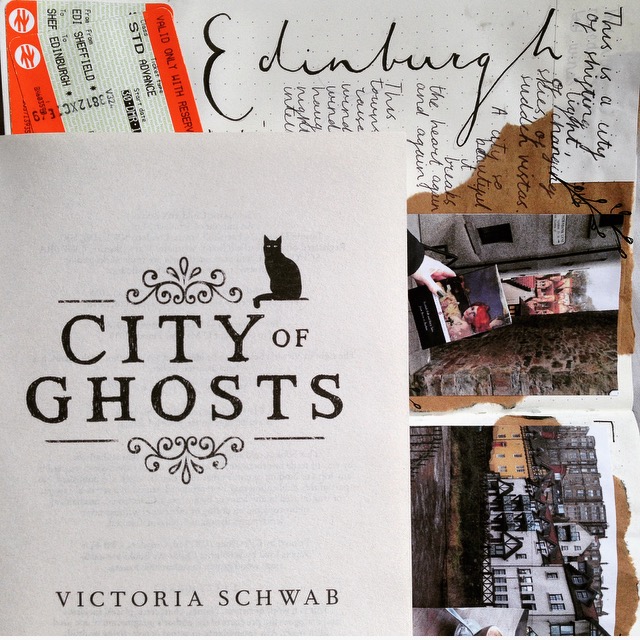 Imagine being able to see ghosts when your parents are ghost hunters (of a fashion). Helpful, right? Well…not so much. Cassidy Blake sees ghosts everywhere she goes, and she certainly doesn’t need to visit the most haunted places in Edinburgh to prove that. But of course that’s exactly what happens.

Now I don’t usually read middle grade – I bet you’ve not seen that written in every review for this book, eh? – but being Victoria Schwab I just had to give it a go. That, and I was feeling a quick read, which oh my gosh it most certainly was. There’s no better feeling than flipping through the pages, feeling like the speed-reader you never were when really you just have many more years of practice than then intended age group.

I was glad to find this still felt like a Victoria Schwab book, despite the different audience. Her dark stories wrapped in fantastical worlds are what makes her an author I always go back to, and it was so bizarre recognising her style of writing but set to a different tune. (A good kind of bizarre though, let’s not get that confused). It wasn’t as intense as the other books I’d read by her, but it still remained somewhat dark but in a more lighthearted, fun way. If such a contradiction works? It does now.

Granted though, I struggled to imagine the characters at…well, any age really. Cassidy is twelve years old, but I’m not quite sure how I pictured her. I will say though that this is probably not a fault of the author, but in myself – I’ve barely been around children of any age until recently, so we’ll be damned if I know how kids act at what age.

One thing that could’ve been helped though was the setting. Edinburgh was for sure a perfect place to set a ghost story, with its pride in centuries of history evident to see. It was fun reading a story set in a place I’ve visited myself, being able to picture the streets and understand the specific place references such as Blackwell’s and Greyfriars. But…it didn’t feel like Edinburgh to me. I could imagine it well enough because I’d been there, but I wonder if I’d have been able to if I hadn’t. It needed more description, and while I get that a description heavy book isn’t what a younger audience is after, I just think that maybe a few more sentences here and there could have done it, especially since Cassidy is a photographer. Subtle focus could’ve been brought to her surroundings through what she’s taking photos of, but nope. I am at least glad she didn’t try to write a scottish main character, which would have undoubtedly fallen on stereotypes (although within the few scottish characters that were actually there, one of them was the very definition of “stereotype”).

That being said, I’m intrigued to see where the next book is set. I’m intrigued to see what else could possibly happen, because this story is one of those I genuinely marvel over. How does Schwab continue to create so many unique stories? I don’t know, but I’ll for sure keep reading them. I want to know where Cassidy ends up next. If we ever find out more about Jacob, my poor sweet innocent soul – whose friendship with Cassidy, by the way, was without a doubt my favourite thing about this book. Do Cassidy’s parents get a second season of their show? Do we get to see more of the cat? I was certainly hoping for more cat content. It is on the front cover, after all.

While I had a few gripes with this book, it was a fun read and one I’ll no doubt read again before the second one comes out. It was dark but fun, eerie but almost comforting at the same time, and I have full faith that only Queen Schwab can pull off such a feat.

Have you read this book? Are you a fan of Victoria Schwab’s other books? Let me know in the comments!