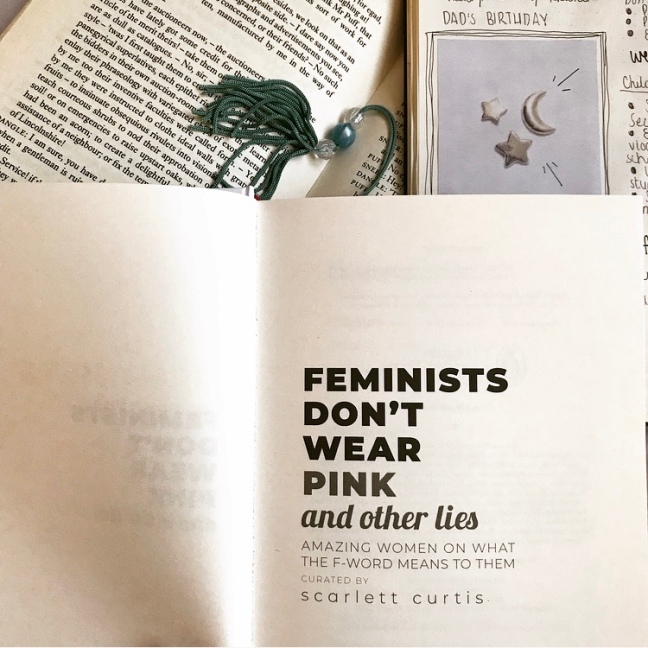 Picking up this book, I had high expectations. It became an event, with me buddy reading this with my friend Jess and setting time aside in my hectic uni reading schedule to make sure I read it.

And then…eh. I don’t know what happened. I have many, many thoughts.

So, this book is basically a collection of writings from 50(ish) different well-known women about different topics relating to feminism. One thing I do immediately have to praise it for is its inclusivity, and I’m glad a diverse group of women with varying experiences were chosen to participate in the collection.

That being said, with there being so many women included…I feel like this was just not put together too well. The writings were categorised into groups such as “epiphany” (discovering feminism), and I almost wish they weren’t. Grouping discussions like this so closely together just made it sound repetitive, with similar thoughts and topics being covered within 20 pages over and over again. It kind of felt like each woman had free reign to write what she wanted regardless of its place in the collection – which in some cases is fab, but not when the book covers certain topics repeatedly. Maybe it needed curating some more, or even just spread out in a slightly different way…but it quickly became a tad monotonous, which breaks my heart to say.

ALong with that, this book is advertised as a collection of essays, but it really, really isn’t. Some of them are essays, sure. But some are anecdotes, some are fictional short stories, some are simply lists of thing, there’s a random poetry break halfway through…it made my brain hurt. I couldn’t wrap my head around what I was reading. The writer and topic would switch every few pages, and when the form switched too? It sometimes took awhile for me to catch on to what I was reading.

Now it’s not all bad, as negative as it sounds so far. I did enjoy many of the writings. As mentioned before, the diversity is something I’m intensely glad for in this book, and it was definitely the topics relating to race, transgender experiences and lesser talked about topics (like FGM) that caught my attention. I was eager to learn anything new, to hear about things that are generally pushed aside by the media and society as a whole. These topics typically took on a more essay or anecdotal style which I much preferred, and I can’t help but think that this form is one of the best ways to make these women – believe it or not – feel like actual people. Imagine that? Shocker, I know.

Unfortunately, it was just very hit and miss. Some of the writings just went over my head entirely, leaving me sat there thinking “ok…but why did I just read that?” The end message of the book is to take action and push feminism and yet after reading, I’m still not sure how. Especially when a lot of the essays just repeated a lot of what’s shouted about on the internet already, so…what can I do beyond that? I don’t know. Was I meant to know after reading this?

Now I will just say, I’m not new to reading about feminism, and so that’s probably contributing largely to my disappointment in this book. I’ve heard a lot of what’s said in here before, and while it’s important to keep pushing these topics until something’s sorted, I was hoping for something more (hence my main interest coming from the intersectionality of this book). As an introduction to feminism, I do think this could be a fairly informative place to start, so maybe I was just the wrong audience for it *shrugs*

BUT THEN. Here’s where a lot of the contradictory thoughts start getting mixed up…

As Jess pointed out in her reading vlog, it feels like you can’t criticise this book. If you’re a feminist, you’re not allowed to. You can’t escape this book without the message of building other women up and supporting them instead of tearing them down as competition, which I 100% get behind (I mean, we’ve been pitted against each other forever. No more). So…to then come away and criticise the large majority of a book that over 50 women worked towards…honestly it feels like blasphemy. I feel like I’m not allowed to criticise this book without being a bad feminist. And maybe that’s more to do with my own thoughts than anything the book said, but it did really push the idea of not criticising women. But criticism is how we grown as people, and nobody/nothing is perfect. So where’s the loophole?

I don’t know. It’s a messy bunch of thoughts circling this book. I just think – for the most part – that this book would have benefitted with either A.) more curating leading to a variety of specific topics rather than just generalised writings or B.) less people writing more/longer pieces.

Still, it wasn’t awful. It would probably be a good introduction to feminism if you’re wanting to read more into it or discover people hoping to take on a more activist approach. I personally was just expecting more, with less confusion.

Have you read this book? What did you think? Are there any other feminist books you’d recommend? Let me know!