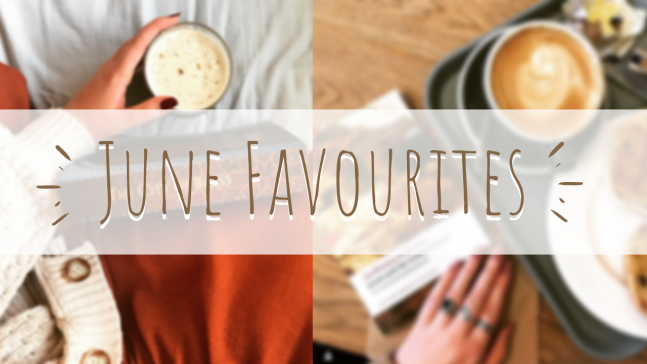 Another month comes and goes, and with it new favourites! I feel like my June favourites are dominated by experiences rather than specific things, which is an interesting change! I guess that’s what summer brings…

The City of Brass

Apparently our book of the month choices for Myth-Take so far are really quite fab, because I’m pretty sure that since April my favourite book each month has been the Myth-Take pick. Well, this month is no different. The City of Brass was a reread for me so I knew I would adore it, but my love only grew this time around. When I first read it, I rated it 4.5/5 stars…this time, it gets the full 5 stars and is officially one of my favourite books! I did wonder if this month would hold a surprise favourite, as I found myself reading quite a few contemporaries and books I wouldn’t usually pick up. But nope, fantasy still reigns. And with such rich world building and an addictive yet complicated plotline like The City of Brass, it’s no wonder why. I do have a reading vlog for this book, so I’ll link that here if you’re interested!

The amount of times I’ve visited the Waterstones Cafe this month is a tad ridiculous. But when I need to get out of the house, or work in a different environment for a tad more motivation, the Waterstones Cafe has become my go-to. Seriously, I’m sat there now while writing this post. It almost feels like a second home to me now, and I just always have the urge to return. I’ve loved all the food I’ve tried so far, and it’s just such a comforting atmosphere to me. Whether I go there to sit and read, blog, work no my research or meet friends, I spend hours there without even realising it. And I imagine I’ll be spending many more hours here too.

Becca and the Books

Becca’s channel has been one of my favourites for awhile, but this month I found myself falling even more in love with reading vlogs and with that, Becca’s vlogs. I’m a tad fussy when it comes to vlogs and will only watch certain people’s, but something about Becca’s channel just consistently draws me in. She is the queen of book synopses, often describing a book better than Goodreads ever could. Her thoughts are always so in-depth and concise, and even though we don’t have the exact same sense of reading taste, I always look forward to hearing her thoughts on what she’s read recently. I loved her most recent video – her mid year reading stats – and so thought I’d link that here!

Mid way through June, my boyfriend and I went on our first lil holiday together to Poland. And oh my goodness, it was great. Not only was every day above 30 degree heat, but some of the buildings and places we visited were just stunning. I particularly adored Old Town and all its colourful buildings, and the inside of some of the grand buildings we visited were just beyond stunning. The Palace on the Isle is one I won’t forget, with every room decorated with art and statues inspired by Greek mythology. The amount of photos I took was a little ridiculous, but I just wanted to remember it all. I’ll be creating a journal with me video soon for my trip to Poland, so be sure to subscribe to my channel and keep an eye out for that!

Early in the month, Charlotte and I went to see Kinky Boots at the Nottingham Royal Theatre and I was so giddily excited, it was ridiculous. But the only music I listen to is musical soundtracks, though I’ve barely seen any musicals because theatre tickets and a trip to London are so damn expensive. But then I found out Kinky Boots was touring, and all but dragged Charlotte to go and see it. I adore the soundtrack already, and seeing it on stage has only made me love it all the more. The performance was incredible, and I found myself smiling through so much of it. Not to mention certain choreography scenes just blew my mind – I’m talking drag queens dancing about on conveyor belts in high heels. It was immense. If you get the chance to see this musical at all, please do!!

Carrying on with the musicals, the Mamma Mia 2 soundtrack has been rattling through my head the entirety of June. I’m not kidding. More specifically, three songs – Angel Eyes, When I Kissed a Teacher, and Why Did It Have To Be Me. I’ve just been singing those three songs every single day of June, and it’s only just beginning to elevate a tad. And I mean a tad. It’s still going strong. And I can’t even be mad because they’re all such fab songs.

So that’s it for my June favourites!

Here’s my June reading wrap up if you haven’t seen it already:

What was your favourite read of June? Is there anything you’ve been particularly loving lately? Let me know!