I was going to save this idea until June, when we’re officially halfway through the year. But I felt like doing it today instead.

At the start of January, I made a post of all my bookish resolutions for 2016.

And it randomly popped into my head the other day – “I wonder how I’m doing so far?” Because most resolutions are broken halfway through January…but I’m silently hopeful that I’m at least getting somewhere with them.

Also, I’ve realized that the resolution I’m most determined to succeed in isn’t even on the original post – I somehow completely missed it out! Who knows how I managed that *facepalm*  So that one will be added on at the end.

So let’s see how well I’m doing with my resolutions so far!

Aaaaaand this is where I have to pull up my Goodreads challenge to have a look back on what I’ve read so far….

Okayy, so it turns out that this year so far I’ve read 4 historical fiction books. Those being Outlander, Wolf by Wolf, Salt to The Sea and Prisoner of Night and Fog.

I know 4 isn’t many, BUUUUUT…it’s more than I read last year. Because I don’t think I’d read ANY historical fiction before this year. And I’ve still got some on my shelves waiting to be read this Summer. So I think –

I’m not quite sure what to make of that.

When making this resolution, I had meant more than two. But I knew this is one of the ones that might not be complete, since I’m so hesitant to buy a book that’ll cost more and be read within half an hour.

But I have – technically – collected a couple more graphic novels.

Okayy, this one is pretty easy.

This year, I haven’t yet read any classics. Unless you count a Penguin’s Little Black Classic, which was only 50 pages. So I’d hardly call that a book. More a short story.

I did buy Wuthering Heights and The Tenant Of Wildfell Hall so that I can complete this to some extent, but like I said, I haven’t read them yet.

*sigh* One day, I will actually read some classics.

Well obviously I can’t have a proper answer to this one yet, as it isn’t then end of the year.

But let me tell you, I’ve got a pretty good feeling about it, because I’m already 62% of the way through. 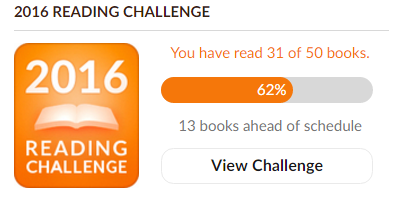 5. Try to get another signed book

I completely forgot about this resolution! It’s just a coincidence that I have actually already completed it! 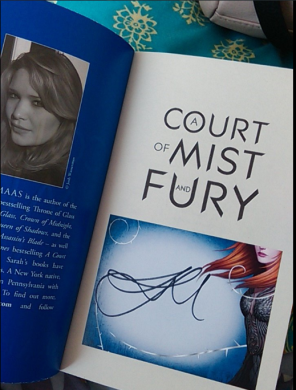 I got A Court Of Mist And Fury at the start of the month, and the store had signed copies so I managed to pick one up!

I uploaded my review for this book yesterday, so to see that, click here.

Well, this one was always going to be a success. And if you’re looking at this now thinking “what sort of resolution is that, to spend more money?” Well, as I explain in the original post, one of my goals in life is to have my own personal library of books. So that means building up my collection.

And since I’ve had a book haul every month so far, it’s safe to say that I won’t be failing this one this year.

Another one that’s easy to judge. No need to ramble here.

I haven’t read it yet.

8. Keep up with blogging

And here’s one that you guys can judge too!

I feel like I’ve definitely kept up with my blogging. Every week there’s been at least one review and discussion post, usually with two other random posts at the weekend too. And honestly, I think I’ve only missed two posts in the entire year so far. I’d say that way a success, right? Four posts every week has got to be good?

Ahh. The goal I can’t control.

This is the one that didn’t matter whether I complete the resolution or not, I merely added it because I felt like I needed exactly ten goals, and that one would be absolutely amazing.

But like I said, I can’t control this one, and I don’t mind either way because you guys that are here, are amazing ❤

Verdict so far? FAIL…but with optimism!

10. Continue being my enthusiastic self

Well if you’re judging from the amount of exclamation marks, capitals and smiley faces I’ve used in the posts of this year, you can easily tell this one is going well so far.

And I can guarantee you, it is 😀

Now this is the one that is most important to me as a goal, and the one I will ramble about, and the one I somehow managed to miss of the original list.

11. Finish some of the book series I’ve started

I’m currently in the process of reading 22 different book series, I think. I counted them the other day, but I wasn’t at home so I might have missed some. And I have this really bad habit of starting book series, and then taking years to finish them. So my main goal this year is to finish some of the series I’ve started.

So far, I’ve only finished one series. Pretty pathetic sounding. That series was the Grisha trilogy.

BUT I’ve caught up on a few series as far as I can, so maybe they count? Because the next book isn’t out yet, so I’ve finished them as much as I can. These series being:

– The Darker Shades of Magic series (waiting for 3rd book)

– The Am I Normal Yet? series (waiting for 3rd book)

So I’ve caught up on them as much as I can. And I’ve also been slowly catching up on some series :

– The Raven Cycle – Need to read the final book

– The Lunar Chronicles – Need to read Stars Above, the novella bind up

– The Shatter Me series – Need to read the final book

Granted, I do need to finish a lot more than that to finish the series I’ve started. But I’m getting there. Slowly.

Verdict so far? You tell me! I’d say it’s a slow burning SUCCESS

So that’s how I’m doing on my bookish resolutions so far this year!

What did you think of this post? I hope you found it interesting, because I certainly did 🙂

Do you think there’s any there that I’ll definitely succeed in? Or any I’ll fail? (don’t worry, I won’t mind if you say I’ll fail. It is a resolution, after all!)

What do you think of my last resolution, to finish more series? Is that a success so far or nah?

Did you set yourself any bookish resolutions? How are you doing in them so far?

What your biggest bookish goal for this year?