2017 brought bullet journaling to me. And I absolutely LOVE IT.

I have a love for drawing, but that sort of died a bit when I took a course in art and was made to draw things I couldn’t care less about every day for a year. But ever so gradually, that love for drawing has made its way back to me, but alas, I have no inspiration. I’m not one who can just think up an imagine in my head and draw it. I have to use photo references, and a lot of practice attempts.

So what better way to quench my need to draw than starting a bullet journal?

Now, if you don’t know what a bullet journal is…I’m really bad at explaining, but I’ll try my best.

To me, a bullet journal is just a book you use to make your own diary/planner. It sounds like a lot of faffing around, having to draw your own weeks out, but it’s great if you have a creative side, or if you want to tailor your planner to suit you. Have a week where nothing is happening? Just don’t draw it in then. There’s no need!

However, I also use my bullet journal a little bit like a scrapbook. I add lots of decorations, and I’ll be adding photos and journal entries for any days that are particularly exciting (not that those come around often, but they’ll be a few hopefully).

If you’re still confused, you’ll see what I mean with the photos. Speaking of which…

First of all, let’s talk supplies: 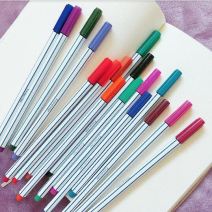 THE JOURNAL: I use a beige MoleSkine softcover with dotted pages in size large, though you can get it in a choice of colours (link)

. I know a lot of people really love the Leuchtturm Notebooks (link)

, but I personally wanted one with a softcover so I went for the Moleskine.

PENS: The fineliners I use are a set of Finewriters from The Works (which I’m pretty sure is only a UK brand – sorry international folks!). I’ve seen a lot of people use the Staedtler Triplus Fineliners too, which I have a few of from an old pack and would recommend (link)

. I also have a set of Finepoint Sharpies (link)

, however I only use them when drawing on something I’m going to stick in, as they bleed through the pages.

WASHI TAPE: Looking at the photos of the swatches – the first row on the left and the third row (all dotted colours) are all from The Works, and the rest are from Primark.

OTHERS: I sometimes print photos from Pinterest to stick in, so along with those I always need scissors and glue. I sometimes use highlighters too, though not often.

Now for the actual journaling…

I’m only including the main pages of my bullet journal in this post, one, because this is already going to be the length of my TBR by the time we’re done and two, because I’ll be making a full flip through video towards the end of February.

But the first page we come across is the one saying “hello 2017”. After this, there’s a yearly overview/calendar and a space for me to draw in all the books I read this year.

TIP: Don’t know what style of font you want to draw? Just type “fonts” into Google, and it’ll come up with loads of websites that allow you to download fonts. Now, stay with me here. Obviously we’re not downloading them, since we’re working with paper, not screen. BUT these website DO allow you to type in the word/phrase you want, and then scroll through hundreds of fonts, seeing what it looks like. Pick one you like, and draw! I personally use this website, for anyone interested: http://www.1001fonts.com/

Then we actually enter January, with this pink/purple floral spread. The left hand page is mostly washi tape, but the right side just has a couple of pictures I printed out along with some quotes. The quote in the top corner says:

“I began to realise how important it was to be an enthusiast in life. If you are interested in something, no matter what it is, go at it full speed. Embrace it with both arms, hug it, love it, and above all become passionate about it. Lukewarm is no good.”

TIP: Always use pencil first. Cliche, yes. But there’s always lazy moments where you can’t be bothered to get up to find a pencil and ultimately end up regretting trying to wing it. Trust me on that one. It’s easier to erase pencil lines after (though make sure the ink is dry first otherwise you’ll end up with a smudged mess). 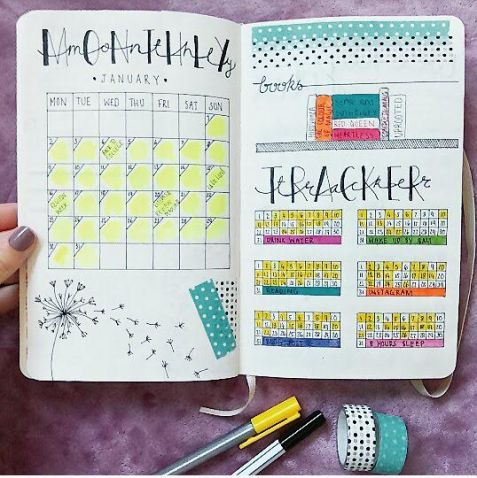 Then we turn to my monthly overview. On the left, a calendar for January just so I can write down any events happening and check dates, the rest of the page filled with a simple dandelion doodle. On the right, I have a shelf where I draw the books I read that month, to make it easier for me to make my Wrap Ups at the end of the month. I also have my habit tracker, where I just colour in the square on the days I do those things.

TIP: Empty space? Washi tape. Stickers. Doodle. Print a nice picture out. Do a random paint splotch. Write a quote. Colour with highlighters. Add a post-it with some kind of note on it. Colour in the squares in a funky pattern. The possibilities are endless.

The next few pages are taken up by weekly spreads, then we get to…

My gratitude log for January! I drew the right hand page first, just going around in this arch leaving a space for every day. Most of my ideas are from Pinterest, including this one. If you scroll through my Pinterest board, you’ll probably recognise a fair few of the layouts. But anyway, the idea is to write one good thing that happened every day.

I changed the quote in the middle slightly because it reminded me of Tangled – my favourite Disney film – and since I had a spare page right next to it, I decided to paint a little figure of Rapunzel looking out to the sky and her lanterns. 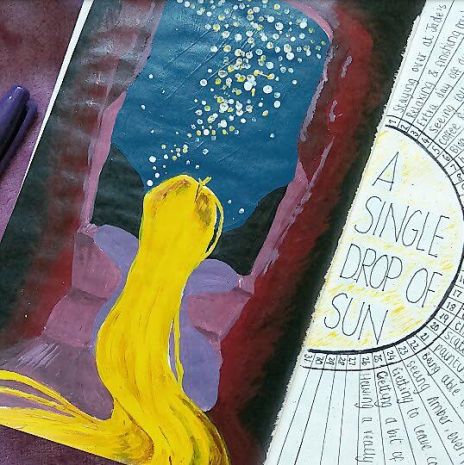 After this, we carry on with the weekly spreads…

I change my design for every week, though I know a lot of people keep all theirs the same. I just like seeing all the different layouts people do, and trying my own. I get bored too easily to just stick to one.

This is my favourite weekly spread so far, just because I like the font I used for the days of the week. While it looks fairly empty, there is actually quite a lot more written in it by now 😆

TIP: When doing cursive hand lettering, don’t press down on the pen too hard. In fact, barely press down on the pen at all if you can help it. Just keep the ink flowing, and all the loops and curves of the writing will look better without jagged edges from the pen dragging across the page. Though if you DO still get jagged lines – I do all the time – just make the line a bit thicker and smooth it out 🙂

I then have a spread for Disney films, where I can cross of which ones I’ve watched/the ones I own, and also a page called “January memories”.

Then we turn to… 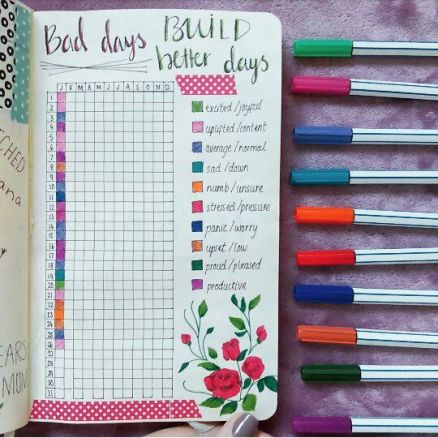 This would have gone in the beginning of my journal, but I was in two minds about adding it. But eventually (after asking on twitter) I decided to go for it. A mood tracker. At the end of every day, while filling in my gratitude log and habit tracker, I also think back and colour in the box for the day depending what my mood was for the majority of the day.

While I started this just because I like having things to fill in at the end of the day (priorities, lol), it was pointed out to me that this could actually help with my mental health. While looking at a row of bad days might make it worse for some people, for myself and many others, seeing those times can act as a motivator to dig yourself out of that hole. Not only that, but for me personally, I could go through the whole day in a bad mood, ready to snap at anyone who looked at me. But getting to this at the end of it all, thinking back…sometimes I realise that it wasn’t actually that bad after all. Of course, I still fill it in that way, since that’s how I felt most of the day, but it means I’m more likely to go to bed with a clearer mind.

TIP: Always test your pens on the actual pages of your bullet journal first. Use the very last page as a sort of “tester” page. Some pens will bleed through the page, some won’t – some might a little bit but still be useable. It’s better to try it first than regret it later. I’ve fallen victim to this with my sharpies – one page has a random blotch right down the middle of it because I didn’t test them first *shakes head at self*

And that’s it for today!

I’ve started my February spreads at last, but they’re all still in progress so I’ll be showing those in my Flip Through Video. Be sure to subscribe to my booktube channel to stay updated with that.

Do you have a bullet journal?

If you do, how do you design it? Like a scrapbook, minimalist, colourful?

If you don’t have one, do you plan to start one at any point?