Well this was meant to go up Wednesday. But things happened, and it meant this review had to be delayed slightly, since I had no time to write it. But never fear, it’s here now.

Of course I read this graphic memoir in January. I’ve been after it for months, and after finally getting it for Christmas, I wanted to read it as soon as possible. I would have read it immediately, but I wanted it to count towards my 2017 Goodreads challenge, not my 2016 one. Anyone else get that towards the end of a year?

Let’s dive into The Complete Maus! 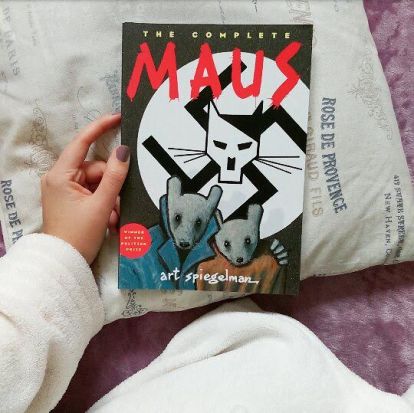 Series Status: A bindup of volumes 1 & 2 of Maus

Combined for the first time here are Maus I: A Survivor’s Tale and Maus II – the complete story of Vladek Spiegelman and his wife, living and surviving in Hitler’s Europe. By addressing the horror of the Holocaust through cartoons, the author captures the everyday reality of fear and is able to explore the guilt, relief and extraordinary sensation of survival – and how the children of survivors are in their own way affected by the trials of their parents. A contemporary classic of immeasurable significance.

As someone who loves learning about history, I was always going to like this graphic memoir. And while I’m on a bid to introduce myself to more non fiction, a graphic memoir was the perfect way to start that.

So this is the story of Vladek Spiegelman, drawn through his son, Art Spiegelman. And that one point alone – how it was done – was the main crux of my enjoyment. Because it wasn’t just the story of war. Oh no. Instead of simply drawing what his father said, Art Spiegelman actually drew the entire process. He drew himself visiting his dad, coaxing him into telling more of his story. He drew what he was like in later life, a small snapshot into how all this affected him long-term. And through that, I found myself feeling like I was sat right in front of Vladek Spiegelman – him in a chair, myself cross legged on the floor – while he told his story. How a graphic memoir can do that, with so little words in comparison to novels, is beyond me. But I loved it.

And then we have the art. Completely black and white with quite a sketchy look, each page is packed with drawings. It can look a bit overwhelming at first, but I personally think it suits the story really well. There’s the metaphor too – the Nazis are drawn as cats, terrorising the mice (ding ding ding, we have the title: Maus). Such a simple way to explain things, in a time when things weren’t simple at all. Suitable for a graphic memoir though, since there’s not really much leverage in explaining who each person on the page is and which “side” they belong to.

I expected to get emotional. But…I didn’t. I have a feeling that’s partly to do with the fact it’s a graphic memoir, and not as much time is spent describing how horrendous everything is. But also because of Vladek Spiegelman himself. It’s his story, yet as he tells it, he doesn’t seem to reveal many emotions. He just…tells the story. Here are the facts. This is what happened.

Though I might have felt more had a bit more been revealed about Art Spiegelman’s mother. In the beginning, it’s mentioned that she committed suicide after the war, and while it does go into it a little bit, nothing about that is really explained. Granted, that may be because they don’t know much themselves. But still. She’s mentioned so often throughout the memoir – as you would expect – but she herself doesn’t seem to be in it much. I’d have liked to see more of her.

As hard as they try, books will never be able to portray these events accurately. Nothing will. There’s a nod to that even in this book. But with things like these, though I (luckily) may not be able to imagine such ongoing hunger, such heartbreak, the pain and suffering…I might be able to understand a bit more. I can read books like this and know that at least their story isn’t going untold. At least I’ll be here, remembering for them. And that is the least I can do.

If you haven’t, do you plan on reading it?

Do you know of any other World War II nonfiction books I could read? (apart from Night, I already  have that one)