So when I started this book on Friday and got just under halfway through, I decided yesterday to try and finish it. And that I did.

So you get two reviews from me this week! Aren’t you lucky? (Probably not – I doubt anyone is bothered really haha!)

And if you haven’t already, click here to check out my review for the first book in this series – Shadow and Bone

So let’s talk about Siege and Storm! 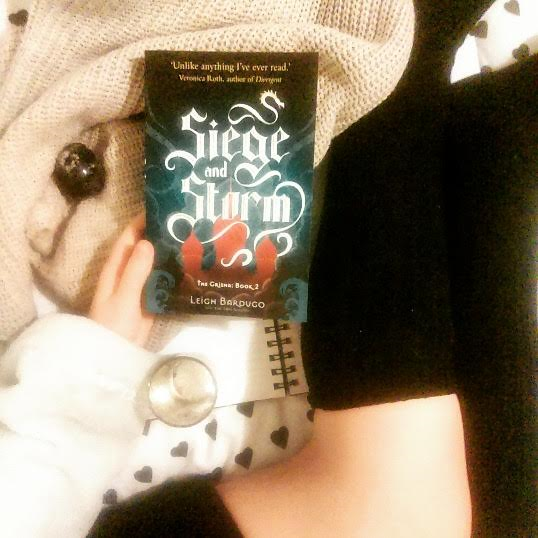 Series Status: The 2nd book in the Grisha Trilogy

The Darkling cupped my cheek with his hand, and when he spoke, his voice was almost tender. ‘This is just the beginning,’ he whispered.

Alina thought she could run from her past and escape her destiny. She can’t.

Mal hoped he’d done enough to protect the girl he loved. He hadn’t.

The Darkling, more powerful than before, is hungry for revenge. He needs Alina.

Soon Alina must choose between her country, her power, and the man she loves — or risk losing everything to the oncoming storm.

OK, so unlike most people, I actually didn’t enjoy this as much as the first. But I don’t know why! And it’s really bugging me! UGH.

I’m going to try and write my reasoning down, but I feel like I won’t be able to figure it out.

Don’t get me wrong, I did enjoy this book. I mean, I read it in 2 days, and with me being a pretty slow reader, that’s surprising. But I feel like if I’d taken any longer to read it, I would have dropped the half star on my rating.

I think the issues I had with this book were the same as I had with the first book. I didn’t like one of the main characters, Mal. Characters are a huge part of the story for me, and are pretty make-or-break when it comes to how much I enjoy the story. If I’m going to read about them, and I’m meant to be on their side…well, I have to like them. And I just don’t like Mal. I don’t know if he’s intentionally written that way, since I’ve seen quite a few people don’t like him from yesterday’s post – I just wish he was a bit more interesting.

Other than that the story was alright. It seemed fast paced, with the world having to prepare for a war. I enjoyed the actual storyline more in this book than the first, now that there was something to aim for rather than the story being based solidly on the build up of skills and power. And although these aims are repeated quite often through the book, you can really see how important this section of the trilogy is for propelling the story forward.

This book seemed a lot more shocking than the first. There were quite a few moments where I was genuinely shocked by an event that happened – mainly being plot twists that came around so quickly. It definitely kept me gripped.

I noticed that I was more at ease with the story when it was told through dialogue. I loved the snarky comments and intense conversations that passed between the characters. It really helped build their personalities while telling more of the story in a quick and compelling way. Plus I found that Alina’s (the main character’s) thoughts were better explained when she managed to speak them.

You can certainly see that the ending was aiming towards something  bigger. Something better. And let me tell you, I’m looking forward to reading the final book. So much so that I’ll be starting Ruin and Rising tomorrow. I just hope I enjoy it slightly more than this one, but I think for that to happen there needs to be less of Mal. But we’ll see.

15 thoughts on “Siege and Storm by Leigh Bardugo”