I did it guys.

I finally finished The Raven Cycle.

I don’t know how well this review will be written because I always have trouble writing my thoughts for books like this. But I’ll give it a good shot.

Let’s talk about The Raven King! 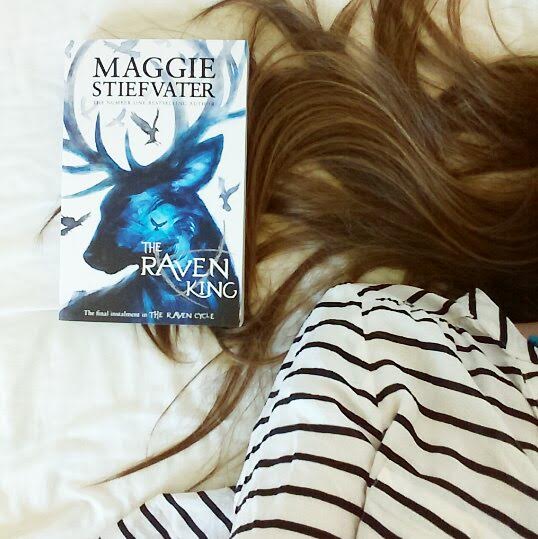 Series Status: The final book in The Raven Cycle quartet

(Found on back cover, view different version on Goodreads)

WARNING: This is the last book in the series so the synopsis may contain spoilers. If you haven’t read the first three books, skip ahead to my spoiler free review!

Nothing dead is to be trusted.

Now the endgame has begun.

Nothing living is safe.

Dreams and nightmares are converging. Love and loss are inseparable. And the quest refuses to be pinned to a path.

But it isn’t really, is it?

Because even though the series is technically finished, it’s such a powerful story I’m sure it’ll live on through us all.

As always with these books, I was sucked into the world immediately. That feeling of wanting to live in their world hit me in full force.

You can tell this book is the last one. That everything is coming to an end. The entire atmosphere is darker, the people more wary, the events more sporadic. The magical elements were so intense, with there being no lack of detail. I just really love the whimsical feel of the story.

And the characters, of course. I think this series is most known for it’s characters. Because what’s not to love about them? They’re all incredible. They’ve been built up so much in the previous books, and that character development only continues on in this one – in fact, possibly more in this one. I adored how the relationships adjusted to suit each person. And the relationships themselves? I’m obsessed ❤

The off-handish way Maggie Stiefvater explains events carried on through this book. Things are explained exactly as they are, leaving you as the reader to feel how important everything is yourself. There’s no sugar-coating, but also no exaggerating. Things are as they are, and the weight of the situation is discovered through the characters, and your own feelings. I really admire that style of writing, even if it is difficult for me to explain exactly what I’m rambling on about. Especially when it’s an interesting mix of history and paranormal – both being things I love learning about!

Even though this is the last book, a few new characters were introduced. And while I thought it wouldn’t work introducing them at the last minute, I was pleasantly surprised. I really liked their place in the story, and how they added a little bit more to each situation. Though I was left asking some questions about them. But I’m sure that can’t be helped when they’re brought into the story so quickly.

I was really impressed by this book. I wasn’t prepared, but I was impressed. Though to be honest, I was a tiny bit disappointed about the Glendower storyline, with the build up being so much more extreme than the actual ending of it. And I didn’t understand it much, so I have a few more questions coming to mind. But I loved how the actual book finished as a whole. Sure, it might have been predictable, but it’s what I wanted, so I wouldn’t have it any other way. I think I’d have been furious if it ended any differently. And plus, that epilogue. I just…ahhh. 😀

I went through so many emotions with this book. When I finished it I was crying simply because I didn’t know how else to react. All the feelings built up in me…I wasn’t sad-crying, or even happy-crying…I was just sobbing for everything. Sounds silly, I know.

I really wish I had another book to look forward to. I’d love to see a novella of what happens after. But I don’t think I’ll ever be ready to let these characters go, so even if I did get a novella, I’d still want more. Anyway. This series is great. If you have even the tiniest amount of interest for this series, read it. Please.

Have you read this book and finished the series?

What did you think? (though mark your spoilers if you write them!)

Or maybe you’ve started the series? Which book are you on?

If you haven’t read this series, do you plan to?