How I survived to write this, I don’t know.

I loved the build up to this. Not so much the waiting, but the general feeling of hype from all Potterheads. We took over the world once again! Stay away, muggles.

While I didn’t go to a midnight launch party, I DID go and pick my preorder up on the day. As soon as I could. And they brought animals in! I held a snake, like the true Slytherin I am, but there was also an owl, tarantula, tortoises and toads 😀

Everything was incredible. It was such a magical day. And once I had my copy, had frolicked around with animals for a while, and had some dinner….I went right on home and devoured this book.

So let’s talk about Harry Potter and the Cursed Child! 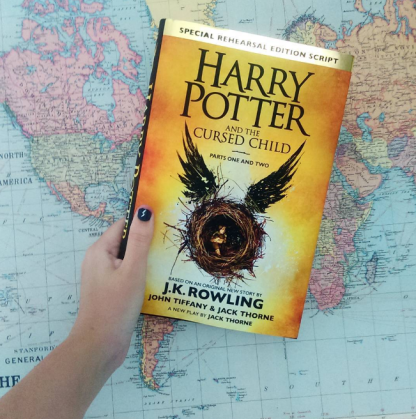 Series Status: The 8th “book” in the Harry Potter series (sort of a companion novel?)

(Found on inside cover and Goodreads)

It was always difficult being Harry Potter and it isn’t much easier now that he is an overworked employee of the Ministry of Magic, a husband and father of three school-age children.

While Harry grapples with a past that refuses to stay where it belongs, his youngest son Albus must struggle with the weight of a family legacy he never wanted. As past and present fuse ominously, both father and son learn the uncomfortable truth: sometimes, darkness comes from unexpected places.

UPDATE 17/12/16
Even though this book has only had a few months of existence, I’ve already moved it to my “old favourites” shelf here on Goodreads, along with all the ones I loved in my earlier teenage years. I originally rated it 5 stars – and the original review is still below – but now a few months later, I realise that it wasn’t actually THAT good. Let’s be real, this was a bit of a weird one. There were a lot of plot holes and unanswered questions. Though I do believe it’d work well as it’s original form – a play. The hype surrounding this 8th “book” (which totally isn’t an eighth book, for any of you confused folk) made me overrate it, which I talk about some more in my The Hype Made Me Read It video, and I wish I’d waited before reviewing it. But now, I’m bumping my rating down to 3 stars. Most of the original review below still counts.
*awkwardly retracts back into nearby hedge after saying my piece*

Where do I even begin?

Okayy. I’ll start here: I am honestly so gutted for the people who are disappointed in this book. Yes, there’s an incredibly-overwhelming/ almost-painful sense of hype surrounding this book. Of course there is, it’s another Harry Potter story.

The main issue I’ve seen is that it’s a play. Or rather, a script. Yes, it’s so very different to the books we know and love. And yes, you have the right not to like it. Even I hoped to see more from this book, but I’m not holding it against it because it’s a script.

When we heard the news about the Cursed Child play, I was devastated because I knew I wouldn’t be able to see it. Probably ever. I knew that to find out the story, I’d have to try and find a summary online and hope it isn’t missing anything. So when it was promised that the script of the play would be published? I’m just relieved more than anything to have this story.

Yes, I would have liked it to be a “proper” book and to have everything explained so much more. To see more characters. Yadda Yadda Yadda.

Did it make me enjoy the book any less?

I LOVED THIS PLAY!

This is the sort of book that relies on your Harry Potter knowledge. You already know the story, settings, and people beforehand, so this book can very happily skip over that and just get on with this new story. Which is great, since there can’t be many scenery descriptions in a text that’s mostly dialogue.

And with it being mostly dialogue, this book is SO quick to read! Not just because of my little fangirly heart nearly palpitating out of my chest at the mere sight of the book, oh no no. It’s quick, witty, easily explained, and so much of the character’s personalities can be shown through their words. Also, it’ll be great for a quick reread when I want a Harry Potter kick.

The next generation! We get to see some of it!

Admittedly, I found Albus so incredibly annoying. Not annoying in the way that I can’t actually read about him…more in the way that if I were his friend (his friend Scorpius being my favourite character of this book), I would very happily shove him into the lake and tell him to swim around with the giant squid until he got a grip. Because I swear that boy was just…UGH. So stupid at times. You might get what I mean if you’ve read it.

Along with the next generation, we see some of our old favourites too. Some of the characters I didn’t expect to see as well, which was really quite lovely. I adored how the story weaved them all together, whether the old characters were related to the new or not. There was one part of the story that I thought seemed a little bit fanfiction-y, but honestly, I’m so on board with it so I don’t care. I’ll hop on that bandwagon because NOW IT’S TRUEEEEE AW YEAH.

It all just made me feel nostalgic. Being surrounded by all that wonderful magic once again will “always” (geddit?) be a comforting feeling for me, so having that combined with the excitement of new-found information just thrilled me to bits.

I had answers to some of my questions. I had a sneak peak into the lives of my beloved characters after that last line. I had the chance to imagine this being acted out, word for word, and try to suss how they manage the magical parts.

I had the chance to read more of the Harry Potter story, and I loved every moment of it.

[Available in Kindle and Hardcover edition]

PS. The hardcover has been reduced to £9.00, so if you don’t have it already I’d highly recommend!

Who was your favourite character?

30 thoughts on “Harry Potter and the Cursed Child | A nostalgic SCRIPT book about a rather annoying child…and I loved it!”